Inspired by New Mexico, French American painter Mark Maggiori is taking the Western art world by storm and forging his own Taos Society 2.0.

A Maggiori painting tends to conjure up freedom, and composure within that freedom.

There are bluish nocturnes and cold-weather scenes, too. Maggiori has done most of those since moving to Taos in 2020.

He lives there with Le Fawnhawk and their daughter, Wilderness, on a five-acre property. He painted in Joseph Henry Sharp’s venerable studio at the Couse-Sharp Historic Site while having his house’s garage rebuilt into a 700-square-foot painting studio. Now that studio has 16-foot ceilings and a massive northeast-facing window that peers out at the Sangre de Cristo Mountains. Maggiori paints while standing at an easel by that window, surrounded by canvases, brushes, art and history books, and a study area with club chairs, a coffee table, and a Chesterfield couch. Navajo rugs are everywhere. So is Western gear. 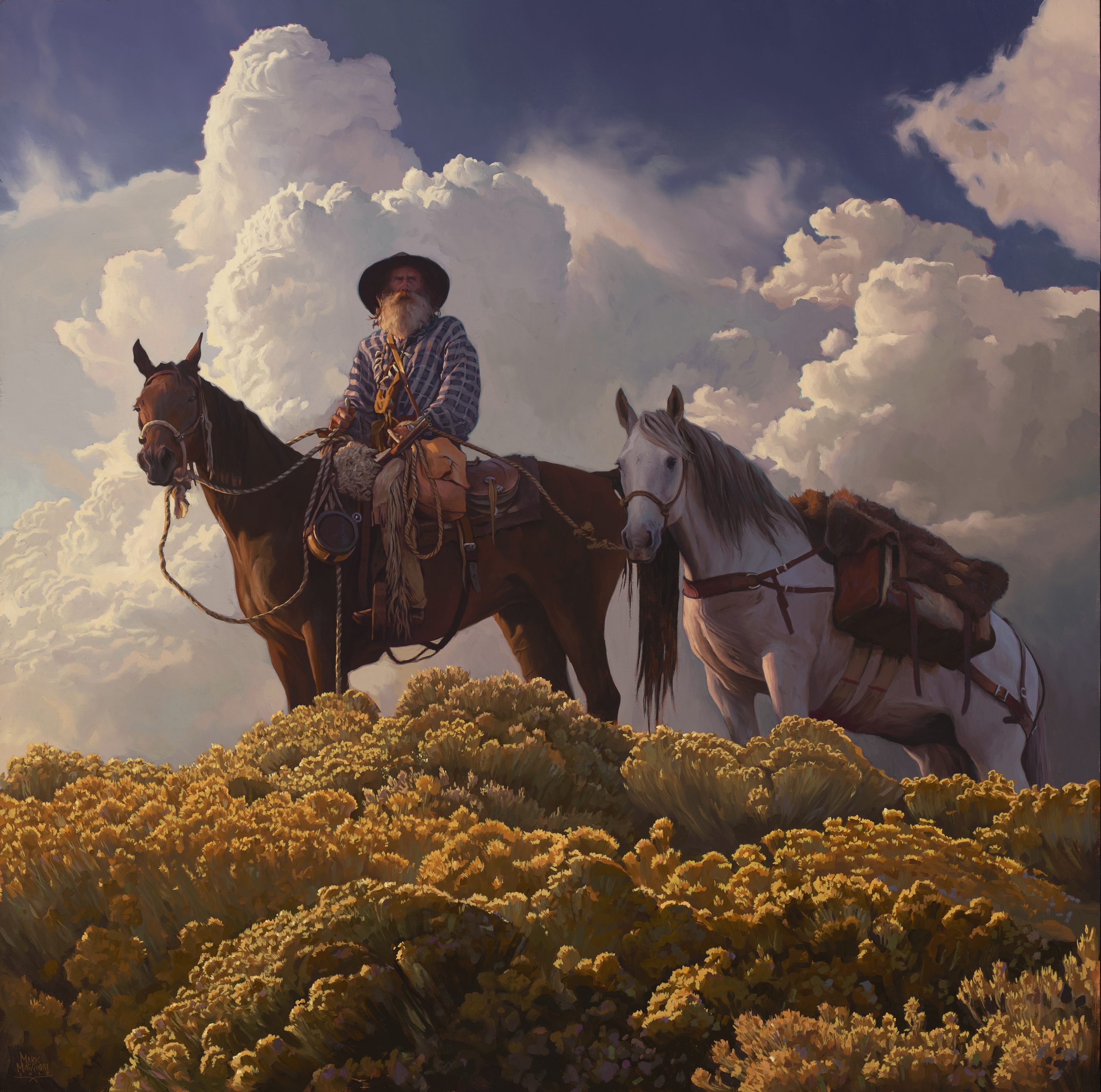 The gear’s essential, since Maggiori’s paintings all begin with reference photos that he stages and shoots on location. He develops a concept, determines the location, supplies the garb, and directs the models and horses. His smaller artworks, which might be 11-by-14 or 24-by-30, usually take a couple of weeks once he begins painting. Larger ones, typically 60-by-40 or 50-by-50, might take a month. The paintings have been selling for $30,000 to $150,000, with prices on the upswing. His work is also in museums, including the Briscoe Western Art Museum, Eiteljorg Museum of American Indians and Western Art, and Autry Museum of the American West.

Growing up in Fontainebleau, France, on the outskirts of Paris, the son of highly cultured parents, Maggiori always dreamed of America: the cowboys, the westerns, the skateboarding, the sneakers. He first visited on a road trip from New York to California at age 15. Back in Paris, he formally trained in drawing at the Académie Julian, the famed art school that members of the Taos Society of Artists — like Bert Phillips, Ernest Blumenschein, and Joseph Sharp — had attended generations before, as had artists as diverse as Henri Matisse, Diego Rivera, and Thomas Hart Benton. While in art school, Maggiori’s band got a record deal; that’s when he turned rock star and also started creating their album covers and directing their music videos.

Eventually he landed in Los Angeles. The lead singer, artist, collector of Western clothes was now a thirtysomething in search of his next career. He married Le Fawnhawk — it was his second marriage — and on a visit to Oklahoma City, his new father-in-law clocked the cowboy hat Maggiori wore and suggested he might like to visit the National Cowboy & Western Heritage Museum.

And that is where Maggiori found his future.

We talked with him about that epiphany, his life in Taos, and the art that binds his bio together. Cowboys & Indians: You reinvented yourself after visiting that famous cowboy museum in Oklahoma. What about it struck you so profoundly?

Mark Maggiori: When I was in Oklahoma and went to the museum, I realized there was a Western form of art. I mean, I might see a Remington painting sometime, but I was really into music. I left the museum and went to a newsstand. I saw magazines showing that art. I realized, wow, there’s a whole scene of people doing this. I wanted to try myself at this. I wanted to paint a cowboy and a horse. I really had a feeling for it. I bought stuff and started painting. I told my wife, I want to start painting. So we gave up our little house in L.A. and moved to Arizona. I started painting in this shack of my mother-in-law’s. I got a model friend in Kingman, Arizona, who had horses. I opened my Instagram account. It was the end of 2013.

C&I: You already looked the part.

Maggiori: I have a big love for clothing. Even when I was skateboarding, I always liked the cool clothes. When I came to America, I started collecting all the cool clothing. When I saw those paintings, the denim, the textures, the boots, the chaps were as exciting to my eyes as the landscapes. I put myself out there in Kingman in order to have time to paint. I had a lot on my shoulders — from another country, had to pay child support. We lived on a small budget for a while. But I’m not gonna complain because I got into galleries very fast. By the summer of 2014, I was making money at galleries and didn’t have to do anything else. C&I: Cowboys started following you on Instagram, but some took you to task.

Maggiori: Yeah, for sure. Some hardcore cowboys probably don’t approve of me because I’m not a cowboy myself and there is this thing about Western art where some Western painters are actual cowboys — and good for them — but it’s definitely not me. I have a completely different background. I give it an edge that makes it unique because of my background. Some understand me and some don’t, and that’s fine. It’s all good. My followers understand me.

C&I: What made you move to Taos?

Maggiori: I came here in 2014 with my wife. I was struck by everything. There was something incredible about the whole place. We kept coming to take photos and to just be here and revisit what it must have felt like 100 years ago. We ended up deciding to buy a house here. I wanted to get more into the Native American culture, especially the Pueblo, because I was very fascinated by it. I refused before being here to actually paint Native Americans just from reference photos that were not mine. I wanted to meet them and really get into it before I was doing it, so that’s what I did. C&I: Silversmith Lyle Wright models for you on horseback in paintings like Sacred Sunset, where he’s on the white horse. How did you start working together?

Maggiori: I said, “I want to do a show with you.” He’s a jewelry maker. He was kind of wait-and-see. We did an incredible photo shoot. After like 15 days, I sent him the first painting, and he changed his vision of who I was. Then I started to promote him on Instagram, and he started to get a lot of attention. It takes time to integrate into a community. I paint Lyle’s cousin Ray, too. Sometimes I see guys at the gas station filling their tank, and I’m like, “Oh my God, you’d be so good.” But I can’t just go, “Hey, dude …” A white guy like me. I even have an accent, [so] it’s worse. You need to know people and be introduced in the right way to be accepted and understood. I’m just trying to do my thing, and people come my way at some point.

C&I: Your clouds are intense.

Maggiori: To me they represent nature and the force of nature, and it brings a tension to the painting that you wouldn’t have with blue sky. The clouds in the composition are a character that brings something to the painting and adds to the story.

C&I: You’ve been compared to Henry Farny, Frank Tenney Johnson, Maynard Dixon, Howard Post. Who do you relate to?

Maggiori: I’ve studied more Remington and Dixon and the Taos Society. Contemporary Western painters come out to the West and find ourselves exposed to these huge red rocks and sunsets and clouds and long shadows, and it is just mind-blowing to be a painter! For them it was 100 years ago, and for us it’s now.

C&I: Then and now — and always? What is the source of the seeming timelessness in your paintings?

Maggiori: There is a universal look to a cowboy: denim, Western shirt, and a vest. I’ve done a few historical works and like doing them, but I also like the idea of romanticizing the West. Of course not in a cheesy way, but in the beautiful version of the American West and the positive part of it. The relationship to nature. It is definitely something that comes out of American history and what this place was before barbed wire and how incredible it must’ve been. I like that angle. Either I paint [American Indians] or I paint cowboys. That’s where I’m at most of the time. I create iconic images. A painting of a guy, a horse, a hat, a sunset. The timeless iconic image. 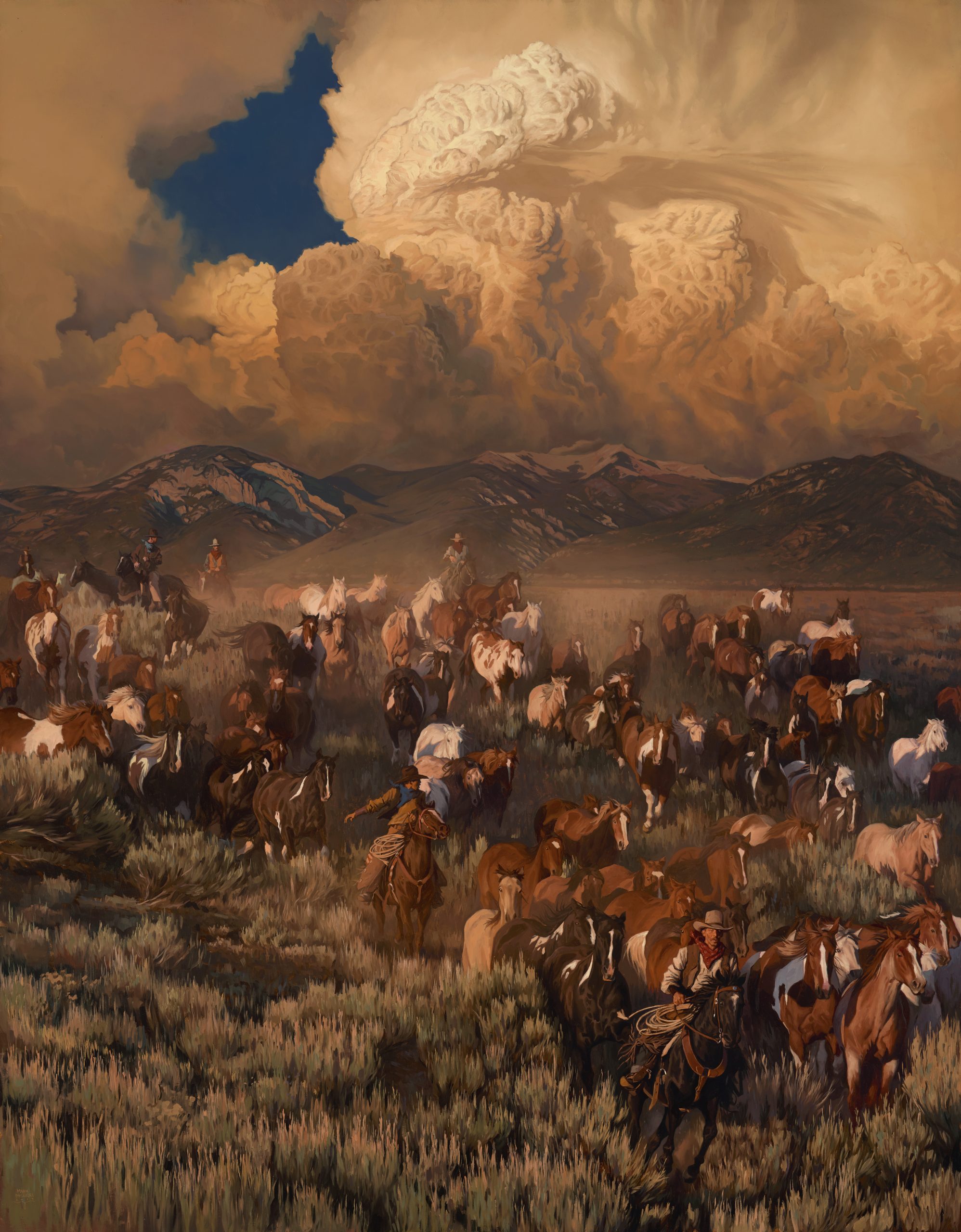 I loved Unforgiven! There was something really classy about it in the direction. Really cool. Clint Eastwood is very amazing in it.

A restaurant called Manzanita Market. I'm there a few days a week. It's organic. Also The Love Apple. Medley. Lambert's. We've got a vintage store too: People of the Valley Taos. I have so much clothing. I have a garage full of clothes. And the store. It's an ongoing thing. The clothing madness!

I don't have my own, but a friend was looking for a place to put hers, so we welcomed her and she put up a fence and put two horses here — an Arabian and a palomino quarter horse. I like having them here to check out.

Here in Taos it's pretty mellow. I wake up early, 5:30 or 6. I go straight to my studio with a coffee and look at things. I go back home around 7 to be there when my daughter wakes up and get her set up with her breakfast. Then I work out until 8:30; have stuff at home — a bench and bars. I start painting around 9:30 and paint all day until 5:30. Then I do family time.

The least favorite is to do paperwork! My favorite is to be able to do what I love. We are our own boss, my wife and I, so we kind of schedule things the way we want. We work a lot, but we spend months in Italy. I'm really enjoying life right now, even though there's that COVID thing. Mark Maggiori will have a major solo show March 11 –18, 2023, at Legacy Gallery in Scottsdale, Arizona (legacygallery.com). Visit the artist online at markmaggiori.com. 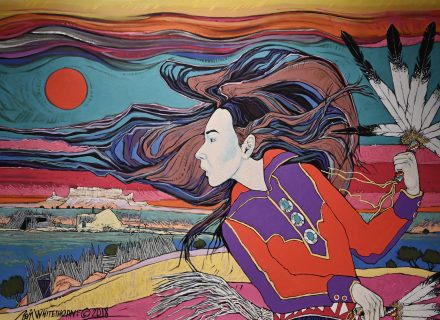