From Arizona and New Mexico to Maine and Hawaii, here are 10 prominent Indian Market figures.

The 100th SWAIA Santa Fe Indian Market on the Plaza takes place Saturday, August 20, and Sunday, August 21, with artists often loading before dawn. Get to know some who have been standouts over the years.

At age 12, preteen phenom Aydrian Day may be the Indian art world’s fastest-rising star. He’s won the Santa Fe Indian Market Youth Award twice and the People’s Choice Award online in 2020, along with honors at the Heard Museum. “I mainly do beadwork. I like to back it with hide — elk hide, moose hide, deer hide. The two times I won at Santa Fe were for purses, but I make other things, too,” says Day, who lives in Peshawbestown, Michigan, on the Grand Traverse Band reservation, and is already choosing future art schools.

He learned to do beadwork from watching his mom, Alexa Rae Day, who serves as something of a momager, in the best possible sense. “I was the one bugging her. It’s not the other way around,” he says. “I don’t have my own Instagram or email, so I guess she kind of is. But she’s not like a helicopter parent or anything. I’m not old enough for my own phone or social media. I’m a talkative person and the salesman of the family.” He leaves the modeling to his mom. When she modeled in the SWAIA Indigenous Fashion Show last year, Day recalls, “I went to the fashion show to watch my mom and took pictures next to Vogue. No one believes that I’m 12 or that I started beading when I was 3.” A frequent winner of the basketry classification, Jeremy Frey used to be the only artist from Maine who showed at SFIM. “Now there are even more. They saw the success that's possible,” he figures. “I enter my work in competition every year. Win or lose, it's still on display for people to see. That's one of the things about the Santa Fe Indian Market process. Not all shows do that." The popular Frey, 44, is backordered for well over a year for his woven ash baskets, but he still comes to Indian Market because, “I’m introduced to the bigger art world out there.” Plus, he says, he likes visiting with everybody, although he does wish for a booth-sitter. “If I have a booth-sitter with me, the weekend goes much nicer than if it’s just me. It’s hard to get away from my table. I have to carry everything in. It definitely goes a lot smoother with someone to help.”

The son of basket weaver Gal Frey, Jeremy grew up making art to entertain himself since his household had no TV or Internet. Nowadays he works in a 25- by 25-foot studio in his house, surrounded by shelves of basket forms, worktables, barks, bins, porcupine quills, and tools. “Working hours are 8 a.m. to 5 p.m.,” he says. “As I get closer to shows, I might go back to work after dinner until 11 or 12 at night.”

He flies to New Mexico with his baskets, which range from 1 inch to 3 feet tall, packed in hard cases with wheels. “The baskets are very sturdy, but they’re not designed for use because of the value.” Many of his devoted collectors start off with pottery initially. “My baskets are a similar size, and they probably show very well with pottery, yeah.” Arthur Holmes Jr., who carves award-winning kachinas, learned his art from his dad. At 60, he’s still farming corn, beans, and watermelons in Keams Canyon, Arizona. He carves his artworks when he’s not tending the crops. “I have a little shop next to our home. And a trailer there next to the fields, where I connect with the earth,” he says.

Attending Indian Market means breaking away from his farming chores. “We go to dinners the whole weekend. Clients! Family! Friends! Eat, eat, eat. It’s good food and good company,” he says. “During this pandemic we’re going through, mainly I always hope we all see one another again. We’re glad to be alive, I guess. Like they say, there’s no word that says goodbye in Hopi. We always say, we will see you again. We will meet up again.” The winner of last year’s Best in Show — the highest honor at Indian Market — for an intricately carved and beaded historical figure, Rhonda Holy Bear, 62, always knew she’d be an artist. “I was born this way. You’ve either got it, or you don’t. You’ve either got the desire to be an artist, or you don’t. It’s not even a desire thing. You’re born that way. You have a natural ability to create. It just comes through you, and you just go with it. You develop it. You work on it over the years.

“You also play with the hand you were dealt,” she says. “This is what kept me in touch with my culture.”

A regular at Indian Market, Holy Bear is additionally represented by John Molloy Gallery in New York. She lives in Henderson, Nevada, with her musician husband Jim Buck and their two Shiba Inu dogs. Her collectors tend to be sophisticated, with a reverence for authenticity. “I usually get people who are moved by the work, emotionally moved by the story. They connect emotionally with the piece,” she says.

Holy Bear works eight to 10 hours a day, sometimes more, in her home studio. “I wake up at 4 a.m., let the dogs out, spend time with the morning star. When the sun comes up, the daylight helps me bead,” she says. Her forté? "My work is about creating timeless, emotionally moving figures that have elegant sculptural lines with hyper-tiny traditional details full of history and stories.”

Holy Bear started carving in high school and continues to research her Lakota tribe. “My devotion to trying to absorb the culture and my own family’s stories is really quite healing for me,” she says. “It’s a good thing for me to do all this work. The way I grew up in South Dakota, it wasn’t the happiest of lives. It was very hard and very difficult. I watched a great number of my family disappear from all the hardships. That left me with the struggle to understand what happened to us. How come it left my family so dysfunctional and in extreme poverty? I have grown quite strong through all that research.” Based in Albuquerque, New Mexico, Beverly “Bear King” Moran learned beadworking as a child from her grandmother, who frequently took her to powwows. “I am known for my women’s northern traditional buckskin dresses with their distinctive fully beaded yoke, skirts, purses, moccasins, and leggings, in traditional Lakota bold designs and styling,” she says. Her gorgeous purses and beaded horse regalia can be seen on her Instagram (@moranbeverly). Her collectors? “I would like to say everybody,” says Moran with a laugh. She has won honors at Indian Market, the Heard Museum, and the Autry Museum. After 38 years as a contracting officer for the Department of Veterans Affairs, she has retired from that job. So now, “Unless I am at a show or on a vacation, I usually bead a minimum eight hours a day, seven days a week.” Considered a master innovator in Pueblo pottery, Russell Sanchez, 58, is not only an exhibitor, he also works behind the scenes. “What I enjoy the most is I do a lot of classification managing now for pottery,” he says. “That’s one of the funnest times. All the artists are there bringing their stuff in. We’re so busy. That happens on Wednesday. Back in the day, you took your stuff in on Friday and judging was Friday night. Then they started doing the preview.”

Tradition is key for the New Mexico-based Sanchez. His pots are hand-coiled, stone-polished, etched, inlaid, designed, and fired with traditional pottery methods. “I live in San Ildefonso Pueblo. I still live in the Pueblo. I’m a traditionalist. My definition of traditionalist means bringing the past along to the future and making it your own.”

You’ll have to arrive early at Indian Market to meet him. “Mine is an early load-in time. I’m usually there by 5 a.m. It’s still dark, but I’ll have a huge crowd of people waiting at my booth already. I’m normally there just Saturday morning because I usually sell out by early morning.” Denise Wallace flies to Indian Market from her home in Laupahoehoe, Hawaii. A professional jeweler since she attended the Institute of American Indian Arts in the ’70s, she won the jewelry classification last year with a one-of-a-kind concha belt. Created from silver, gold, semiprecious stones, and ivory, her jewelry incorporates complex mechanical components.

“I describe my work as Alaskan Native-inspired Southwest jewelry,” she says. “I am best known for my figurative and mask jewelry that strongly reflects Alaska, with interactive and removable components.” Her upcoming pieces? “I am working on a collection to have at Market this year that will reflect the current social and political [issues], and recent pandemic, that will be incorporated into my style of jewelry.” From the remote towns of Tanner Springs and Wide Ruins on the Navajo Reservation in Arizona emerges up-and-comer Penelope Norma Yellowhorse Joe, 19. “I try to paint to save my Native American culture,” she says. She also feeds livestock, rides her horse, attends college online, and helped on a recent cattle roundup. “I have been doing this since I was very young and nothing has stopped me. I just keep pushing myself every day to do the best art that I can paint.”

She got hooked on art while watching her late uncles paint on the ranch. “I can still remember because it was on a big, old table and right in the middle was a Coleman lamp. You could hear the Coleman lamp burning. It would be hot. We didn’t have electricity, but the Coleman lamp — or sometimes it would be a kerosene lamp — was burning away into the night.”

Joe began applying to Indian Market when she was 14; she was accepted at 18. Like her uncles did back in the day, she often paints at night, listening to Led Zeppelin, Janis Joplin, and Merle Haggard. Her paintings are whimsical, colorful interpretations of Navajo culture stories. She also heat-presses her art onto T-shirts. 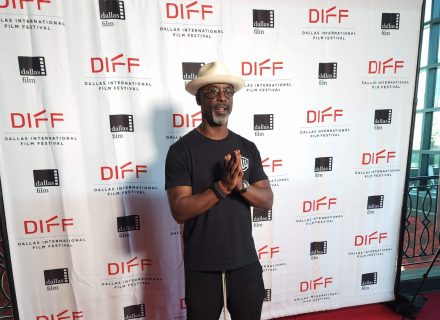