Writer, director and star of Corsicana Isaiah Washington chats about process, his background in the business, and his admiration of Bass Reeves.

Cowboys & Indians: You co-wrote, directed, and star in the upcoming movie Corsicana, a fictional story that incorporates a real life historic character — Bass Reeves. Do you remember when you first became aware of him in your own life?

Isaiah Washington: I was 56. From 1976 to 1980 growing up in Houston before I graduated, I had overheard many of my neighbors, mostly law enforcement, talk about Bass Reeves. But they were Caucasian. They talked about Bass Reeves but they never said he was Black. I never had a grasp or an understanding that someone so significant to them could be a Black man. I was 56 when it was brought to my attention to play him. I thought they were kind of joking, because I’m going, “Isn’t he a John Wayne? Isn’t he white?” I did not know until I read Art T. Burton’s book [Black Gun, Silver Star: The Life and Legend of Frontier Marshal Bass Reeves]. And [when] I read the book, I said, “what?”

C&I: Quite the awakening!

C&I: And then you were captivated? Isaiah: No. So I sat with the producers and they were like, huh? Because they just didn’t know. [Corsicana co-writer and co-producer] Robert Johnson is law enforcement, and he thought he was giving a good salute to Bass Reeves. I said, “Yeah, but he can’t be subjugated in any way. He’s not a guy that’s just going to be a sidekick to a fictional character.” I said, “Yeah, Sam Tanner has to be his partner, not the other way around. Nobody saved Bass Reeves’ life.” ... No one has taken the lead to champion who this man was, what he meant — to this day — to the United States Marshal system.

C&I: Do you want to do more on Bass Reeves in the future?

Isaiah: I still have my own Bass Reeves story that I want to tell, separate from this. ... [There’s no problem with] making, how many Spider-Mans? How many Batman movies have we seen? And no one has ever said, “I don’t want to see another Batman movie.” They can’t get enough of it. Well, as far as I’m concerned, Bass Reeves stands right up there with [the superheroes]. I even had one guy say, “Well, you don’t get shot at all in this movie?” And I said, “According to my research — and I don’t know it all — he’s never been wounded.” He may have been nicked. I don’t know. I think he may have gotten scratched on his knees, hat, his belt. I think he’s been shot at, but he’s never been wounded.

Isaiah: They were like, “That’s impossible.” And I said, “But when you look at a John Wayne movie, did he ever get killed? Did he ever get shot?”

C&I: Well, he did in The Cowboys, but they had to come behind him.

C&I: And he wound up, as a lawman, having to take in his own son.

Isaiah: Exactly. So, there’s so much more. I specifically took the time to cover the fact that his wife just says, “I don’t know if I can continue to do this.” That’s not something that you [realize] is weighing heavily on a man’s mind: “I have this purpose and I have this job that I need to do, and if I leave this time, I may not come back, and if I do come back, my wife and kids may be gone.” Corsicana will open in limited theatrical release Aug. 26. You can learn more about the film on Facebook. 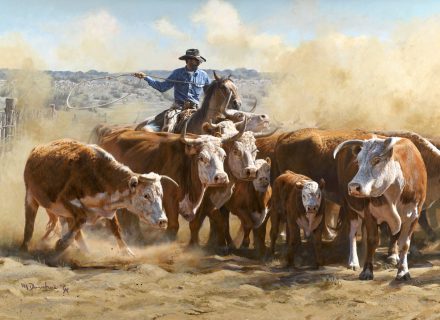