David Simmonds, author of Blackbear Bosin: Keeper of the Indian Spirit, speaks about the life and legacy of the artist who kept the Native spirit alive.

If you’ve been to Wichita, Kansas, you’ve no doubt seen The Keeper of the Plains. At the confluence of the Big and Little Arkansas Rivers, the statue rises monumentally from its pedestal, a Native American in a headdress with face upturned, arms upraised, thanking, imploring, protecting.

It’s the work of Francis Blackbear Bosin, who was also known by his Kiowa name, Tsate Kongia (meaning “black bear”). Born in Cyril, Oklahoma, near Anadarko, in 1921, Blackbear Bosin made his home in Wichita from the age of 19 and eventually set up his studio there. The statue honors his Comanche-Kiowa roots; designed in 1968, it was conceived to share his culture with Wichita, where the Mid-America All-Indian Museum has mounted an exhibition as part of its two-year “Bring the Bosins Home” campaign to collect and care for his original art. Bosin’s path to settling permanently in Wichita and committing to art had a few switchbacks. He got married and had children young. To provide for his family, he turned down a college art scholarship and instead attended a trade school to learn sheet metalworking. Then he enlisted in the Marines. While on a troop ship headed to Hawaii, he became ill and had to be hospitalized — it was then that he returned to painting.

While in rehabilitation in Honolulu, Bosin, who had worked primarily in watercolor up to that point, discovered gouache (he would use the more-opaque technique throughout his life, until eye problems necessitated a switch to acrylics). His style evolved from static, flat representations to a more flowing, symbolic approach. A fellow Marine suggested he sign his work with the name Blackbear.

Following his discharge and divorce in 1946, Bosin set up shop in Wichita. That same year he entered the Philbrook Art Center’s first Indian Artists Annual, where an honorable mention for his painting Green Corn Dance prompted more painting, exhibitions, and competitions. The early 1950s were a time of discovery and development that found Bosin learning more about his Indian heritage and becoming more serious about his art.

Prairie Fire put him on the art-world map when National Geographic published it as a centerfold with a lengthy accompanying article. Next to The Keeper of the Plains in Wichita, it remains the work most closely associated with the artist.

We talked to David Simmonds, author of Blackbear Bosin: Keeper of the Indian Spirit, about the artist’s life and legacy. Reflections of Rainy Mountain by Blackbear Bosin, donated by Arlyn and Lois Huesinkveld.

Cowboys & Indians: Blackbear certainly had a storied career. What was he particularly proud of?

David Simmonds: Although he got the most recognition for the sculpture he did — The Keeper of the Plains — in Wichita, that was his only sculpture. He clearly identified himself as a painter. I think that one of the highlights of his career was when his painting Prairie Fire was the centerfold in National Geographic in May of 1955. The magazine had a major article on Native American art, and Prairie Fire was chosen to be the two-page center spread. After that appeared, requests for reprints of the painting, which was owned by the Philbrook in Tulsa, came in from all over the world. That painting was hailed, basically, as a new beginning in Plains Indian art because, prior to that, the paintings tended to be motionless. Blackbear himself did a number of paintings of katsina dancers and fire dancers and subjects like that, but there was no sense of movement in the work. Prairie Fire showed incredible movement, both of the horrible fire itself and the running of the animals and the Indians on horseback. It was a very significant painting, and it was recognized as such. Prairie Fire hung in the White House for a period of time.

C&I: Another big recognition came 10 years later, when he was invited to the White House. …

Simmonds: One of the big recognitions for him as an artist came in 1965, when he was the only Native American invited to the White House Festival of the Arts, which was hosted by President Lyndon Johnson and Ladybird Johnson.

C&I: I love the story about Ladybird being so taken with Blackbear’s outfit that she invited him to her table.

Simmonds: Yes, his cummerbund and bowtie were beaded by his mother, actually. Ladybird noticed them and invited him to be seated at her table. That was a major thing. [Imagine] what it meant to get to that table: The other people at that table included Helen Hayes, Duke Ellington, and Gene Kelly. Blackbear brought home the program of the evening, and it was autographed by Gene Kelly. C&I: Any interesting backstories you can share about his work?

Simmonds: He did all his paintings at home. He owned a commercial art studio for a number of years, but his paintings he did at home. I would say it probably took about a month to do a painting. Of that month, about half that time was spent reading. Once, fairly early in his career, there was an exhibition of his paintings somewhere, and an obviously Caucasian fellow came up to him and asked him what tribe those Indians were that were in the painting. Blackbear was fairly flippant, I guess, so he said, “Kiowa, Comanche,” which was what he was. And the guy said, “Well, that’s odd, because they’re wearing Sioux moccasins.” At that point, Blackbear decided he needed to be much more meticulous in his background for his painting. Over the years, he acquired a very large library of books about American Indian history, and before he did a painting that was focused on some Indian ritual, he spent a lot of effort getting the details right.

C&I: You’re not just the author of a book about Blackbear Bosin — you’re his stepson by his marriage to your mom, Nola Simmonds. What was he like to be around day to day?

Simmonds: He was pretty easygoing. During the week, he spent his time down at the shop. His art studio actually moved from one place to another because of urban renewal. That’s where he spent most of his workweek, doing commercial art. Particularly in his last gallery, on North Douglas, he had the front set up as a sort of a lounge area with display cases with Native American art of all sorts. He sold jewelry. Of course, his paintings and prints were for sale there, along with pottery, beadwork, and beadwork supplies because there wasn’t much available in the Wichita area. He tried to keep supplies available for folks who wanted to continue the Indian crafts.

C&I: How did he deal with it when he developed eye problems near the end of his life?

Simmonds: I think it depressed him, certainly. He coped with it as best he could, but it changed his style of painting. He could not do the detail he had previously done in his paintings. Toward the end of his life, he changed from using gouache to using acrylics. The acrylics were more forgiving, I guess you’d say. There’s a quote in a magazine interview [where the] guy interviewing him asked him what effect it had on him [and he said], “If I tilt my head the right way, I can make an entire building disappear.” It was like a horizontal band across his vision. … And he was still relatively young.

C&I: For all the health problems he experienced, he still had an amazing career.

Simmonds: He considered himself to have two contemporaries in American art: Allan Houser and Oscar Howe. … There was a period of time when Allan Houser, Blackbear, and Oscar competed head-to-head at the Philbrook’s yearly Indian art competition. Torches of the Soul Seekers by Blackbear Bosin.

Bring the Bosins Home — The Journey Continues is on view through June 4 at Mid-America All-Indian Museum in Wichita, Kansas. Bosin was one of the founders of the museum, which houses the largest public collection of his artwork in the world. The museum’s Bosin Society has been actively locating and securing donations of the artist’s work to archive it for posterity. theindiancenter.org 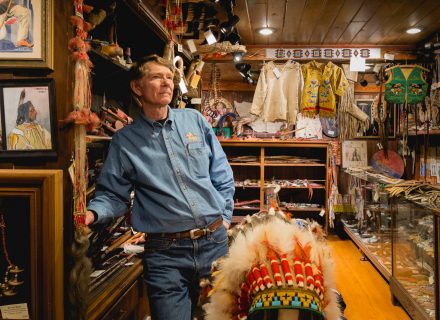