In good — even bad — westerns, it’s all about the climactic confrontation.

If we’ve learned anything from watching westerns for more than a hundred years, it is this: If you ever find yourself in a western showdown, don’t draw first. Regardless of the setting and the combatants, the guy who does is always the guy who gets carried off the street.

Was it like that in the real Old West? Unlikely. In fact, sometimes there were confrontations where nobody won — or lost. “There was a showdown in Deadwood between gamblers Johnny Varnes and Charlie Storms that was pretty humorous,” says Bill Markley, author of several books on Western history. “They both shot and couldn’t hit each other, and when they were done, their friends broke it off and they all went into a bar and had a drink. That’s the kind of gunfight I like.”

According to Markley, the western showdown that came closest to what we know from the movies happened on July 21, 1865, in Springfield, Missouri. That’s where James Butler (“Wild Bill”) Hickok had a dispute with Davis Tutt Jr. The two men stood about 75 yards apart, drew their guns, and fired. Tutt was shot through the heart; Hickok walked away unscathed and was later acquitted for manslaughter. A sensational account of the incident appeared in Harper’s in 1867, making Hickok a national celebrity.

Gunfights, often exaggerated in newspaper accounts, were further romanticized in dime novels. Once western movies picked up on their dramatic impact, the showdown cemented its place in our national folklore and film. Here are seven of the most memorable.

Gregory Peck plays Jimmy Ringo, an infamous gunfighter just looking for a little peace and quiet. But wherever he goes his reputation precedes him. “How come I gotta run into a squirt like you nearly every place I go these days?” Ringo says to Eddie, who confronts him in a saloon, and is the only one in the place not to realize that his life can now be measured in minutes. He don’t look so tough to me.

Surprisingly, top-billed Clint Eastwood is just a spectator at the final conflict between fellow bounty hunter Col. Mortimer (Lee Van Cleef) and El Indio (Gian Maria Volonté) in this Sergio Leone spaghetti western. Van Cleef’s steely-eyed stare under Leone’s direction, the circular space in which they face off that recalls the Roman Colosseum, and the swelling strains of Ennio Morricone’s music all make this a classic. When the chimes end, pick up your gun.

The black-clad gunslinger Jack Wilson (Jack Palance) is hired to run some farmers off their land; only Shane (Alan Ladd) stands in his way. The editing of their climactic showdown is superb as it builds the suspense to a powerful pitch before guns are finally drawn. Palance earned an Oscar nomination for best supporting actor for his role as one of the most imposing villains in the western genre. I heard that you’re a low-down Yankee liar.

And then there were three. Among the many stylistic flourishes added to the western by director Sergio Leone, this triangular showdown, appropriately set in a graveyard, may be the most memorable. Blondie (Clint Eastwood), Angel Eyes (Lee Van Cleef), and Tuco (Eli Wallach) stare each other down for nearly five full minutes to a bolerolike build from another masterful Morricone soundtrack. Yes, that’s three Sergio Leone films in a row. But no other filmmaker rivaled Leone’s virtuosity in raising the western showdown to high cinematic art. Here, he places a tighter frame around the confrontation, to emphasize the close connection between Harmonica (Charles Bronson) and Frank (Henry Fonda). Roger Ebert sort of grudgingly acknowledged the film was good fun “especially if you like Leone’s way of savoring the last morsel of every scene. [The] final shootout …, for example, takes at least 15 minutes. They walk. They wait. They circle each other. They stare at each other. They squint. They spit. They take off their jackets. They wince. Just when they finally seem prepared to shoot after all, Leone uses a flashback. But why hurry a good shootout?” Authenticity was never as important as artistry at the movies, but here’s a showdown that may have looked more like the real thing. When town deputy Everett Hitch (Viggo Mortensen) challenges evil rancher Randall Bragg (Jeremy Irons) — essentially to ensure his friend, sheriff Virgil Cole (Ed Harris), might have a chance at happiness with the fickle Allison French (Renee Zellweger) — he stands in a proper dueling stance, gun already drawn, a strategy that offered the best chance of survival. It’s one of many memorable moments in a criminally underrated film. You’re a lying, back-shooting, cowardly son of a bitch.

The plot focuses mainly on the revenge quest of female gunfighter Ellen, known as “The Lady” (Sharon Stone). But it’s the father-son duel between John Herod (Gene Hackman) and Fee “The Kid” Herod (Leonardo DiCaprio) that lingers longest in the memory, not just for the spectacle of filicide and the father’s ultimate disavowal of the son. All of the Kid’s swagger comes to death in the dirt, making his advice about the tools of his trade sadly ironic: “ … This is the best help a man could get: the Smith & Wesson Schofield .45. Just meat and potatoes. Me and Jesse James think it’s the best handgun in the world. Had the trigger guard removed — it saves drawin’ time. Don’t ever wear it when you’re drunk, or you’ll kill your feet.” Besides featuring a young DiCaprio in one of his early films, this was Russell Crowe’s American film debut and Woody Strode’s final performance. Sh*t, that was fast. 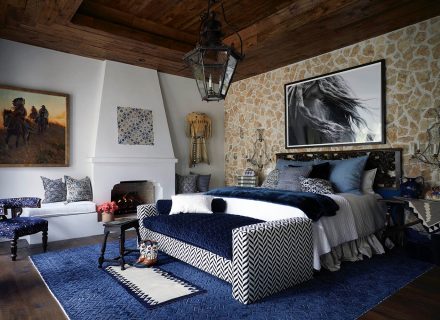