Season 4 of Yellowstone will bring some new faces to our screens.

With the Season 3 finale cliffhanger, we can only hope to see our favorite Yellowstone cast members on screen again in the next season. Did all the Duttons survive? What about Jimmy? And although we couldn't get any spoilers from our November/December cover story interview with Cole Hauser, he did share this with our senior writer, Joe Leydon:

"There's a wonderful relationship — which I won't give away — with Beth and I that comes into our life. And again, it shows another side of not only Rip, but also Beth, and also John Dutton."

Here's what we know about the new characters that will be joining the Yellowstone cast in Season 4.

We don't know much about one of the youngest characters on the show, played by Australian actor Finn Little (Storm Boy, Those Who Wish Me Dead), but it seems that he's had a rough start in life.

“He’s not quite the crushed soul that Jimmy was when he came, he’s more of an innocent open slate.”
– Forrie J. Smith/Lloyd Pierce

Caroline, played by Oscar-nominated actress Jacki Weaver (Silver Linings Playbook, Animal Kingdom) is the CEO of the biggest investment company in the world, and she’s come to town to straighten things out.

"Caroline has the resources to really undermine anything we've tried to do, so it does have us concerned." – Gil Birmingham/Thomas Rainwater

Summer, played by Piper Perabo (Coyote Ugly, Cheaper by the Dozen) comes to Montana as an animal activist — but her plans get a lot bigger as she starts to learn what is going on.

Could Hauser be referring to one of these new faces — or will more Yellowstone cast members be announced before the Season 4 premiere on November 7?

Stay tuned for more Yellowstone updates leading up to the November 7 premiere. 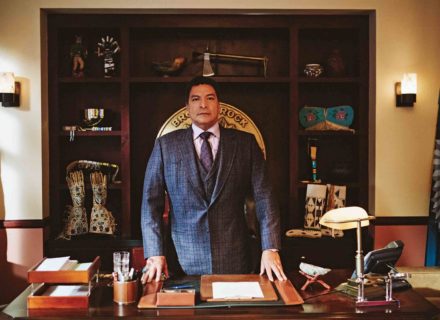