With a name like Speedbuggy USA, listeners might expect country-fueled, soul-bounding tunes that feature the American dream in the greatest of lights. In this particular instance, that assumption would be correct.

Their bio says it best: “Speedbuggy’s historic foundation is the romance of the Wild West. Especially as it was portrayed in the movies and music of the great singing cowboys Gene Autry and Roy Rogers.”

The Los Angeles band, their bio says, is on a mission to put the “Western” back in country Western music: “Some of the most beautiful portraits of the American landscape and way of life are in those songs about riding the trails across the mountains, plains and rivers, and about making a new life in a land full of promise,” Timbo says. “That used to be part of the great American dream — the working man’s dream — and we don’t see any good reason to let it die.”

Witness the track “Bakersfield 2018.” It’s no accident that the band would highlight Bakersfield, California, kicking out the twang with homegrown lyrics about a truck breaking down on the side of the road and the resulting long walk back to Bakersfield from L.A., to “the last honky-tonk where my heart will stay.”

Bakersfield was the birthplace of the Bakersfield sound first popularized in the 1950s by Buck Owens and the Buckaroos and Merle Haggard and the Strangers and later reinvigorated by artists like Dwight Yoakam.

Recently, Speedbuggy USA released the music video for “Bakersfield 2018.” We talked with Brady Sloan about the song, the video, and getting back to Bakersfield.

Cowboys & Indians: What’s the history of the song?

Brady Sloan: “Bakersfield 2018” was written in 2016 but remixed in 2018 as a bonus track for the Speedbuggy release Kick Out the Twang. It’s a song about a blue-collar working-class guy who’s trying to make it in L.A. but misses his love and music and way of life in Bakersfield, and is trying to make his way back. It’s really a take on our sound and how we, for this record and previous, are trying to get back to the Bakersfield sound.

C&I: Where did you shoot the video?
Sloan: “Bakersfield 2018” was shot in Los Angeles and parts of Bakersfield. We wanted to try to be as true to the song as possible.

C&I: Who directed the video?
Sloan: [I] and John Tampkin, [who’s a] friend of the band, directed “Bakersfield 2018” [I’m] also a first assistant director in film when I’m not playing with the band. John was also the DP, director of photography.

C&I: Anything interesting happen during the shoot?
Sloan: On the last day of shooting “Bakersfield 2018” we decided to film the performance aspect of the video at [Timbo’s] house, on his front porch. We had a few friends and family along to help with the production aspects of the shoot. As we were filming, a few folks from the neighborhood began showing up to see what was going on and then more showed up, and before we knew it we had a full-on block party. We ended up playing a bunch of songs. Neighbors brought beer; folks were dancing. It turned out to be a great end to the shoot — a “wrap party,” if you will.

Get an exclusive first look at “Bakersfield 2018” below.

For more information on Speedbuggy USA and upcoming tour dates, visit their website. 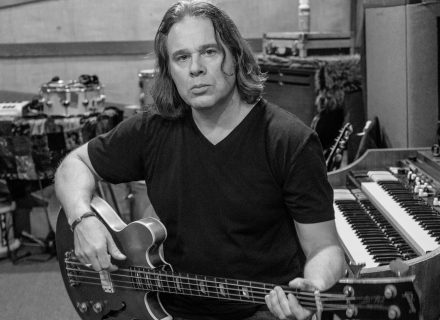