As the only child of George Jones and Tammy Wynette, Georgette Jones was uniquely situated to witness the tempestuous relationship between those country music icons, and to appreciate her parents’ passionate love, inevitable breakup, and enduring bond. She shared her memories in her 2011 book The Three of Us: Growing Up With Tammy and George, which served as the basis for the limited run series George & Tammy — starring Jessica Chastain and Michael Shannon — that premieres at 9 pm ET Sunday, Dec. 4  on Showtime .

Georgette recently spoke with us about her parents, the Showtime miniseries — and the self-doubts she had to overcome before launching her own musical career. 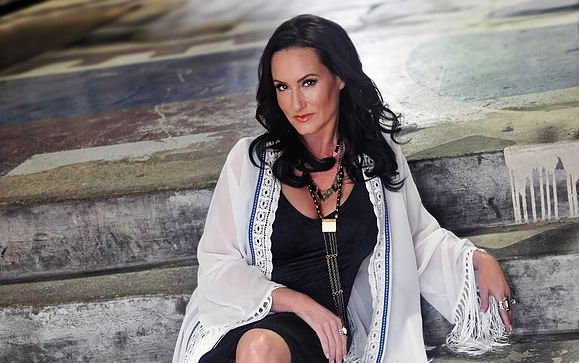 Cowboys & Indians: To start off with the obvious question, what was it like for you the first time you went on the set and saw Jessica Chastain and Michael Shannon made up and dressed like your parents?

Georgette Jones: To be honest, I don’t think I was fully expecting to be as overwhelmed as I actually was. I had seen Jessica blonde before, so I already knew she was really going to look a lot like mom. But I didn’t know what Michael was going to look like. And so the first time I actually arrived on set and saw him, he was leaving his trailer for the set, and he was dressed up as my dad as an older man. And it was so uncanny how much he looked like him, his movements. He obviously had studied him so well.

I broke down in tears when I got to the set because it just really felt like my mom and dad were there. It truly was an emotional experience, but a very gratifying one because they have done so much work to pull this off. I’m so incredibly happy with what they did.

C&I: Are you happy that they decided to go the limited series route with George & Tammy rather than do a movie? Because it feels like we’re getting more detail, nuance and substance here that we probably would’ve gotten in even a three-hour movie.

Georgette: Oh, absolutely. People in the past have really pushed movie, movie, movie is so much better. But I think the industry itself, number one, has changed so much. So many big actors and actresses like Jessica and Michael are doing more TV and streaming things. It isn’t looked at the same way as it was in the past. And for us as a family — we know how complicated their lives were. And their story is so much bigger than a two-hour movie. I think it’s difficult to tell their whole story even in six hours. So a movie would’ve been next to impossible. I’m really grateful that we went this route. And I feel like today with inflation and the cost of going to a movie, it’s also easier and more affordable for more people to watch it from home. So I’m really very thankful that we went this way, and I couldn’t be happier. 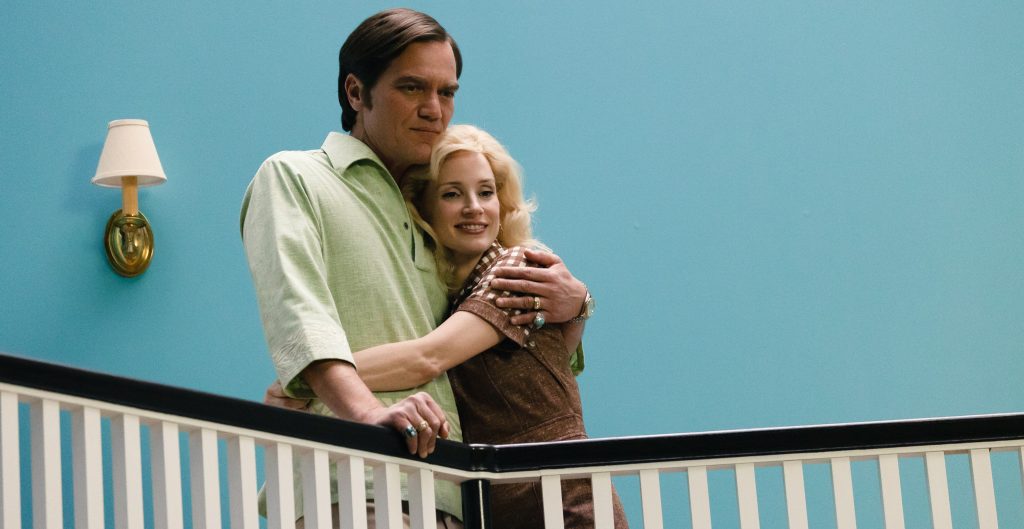 C&I: Do you remember the first time you read, or you heard on a TV show, something about either one of your parents that you knew immediately was an absolute lie?

Georgette: Well, there was a lot that happened when I was a child, and my parents really sheltered me a good bit from that when I was really young. But there was a point where they couldn’t shelter me anymore. By the time I was about 12 or 13, people at school would tell me things that they heard about my dad, especially because people like to talk about his no-shows. And according to my mom, a lot of that stuff was really blown out of proportion. Not that he didn’t do those things — he certainly did — but he had a couple of managers at one time that would book him and take the deposit. And then if he didn’t know about it, he didn’t show up. It wasn’t necessarily that he just didn’t go, he just didn’t show up. And he got a reputation for some things that really weren’t as they were in real life.

But my mom was really great when I was a kid, because anytime somebody would tell me stories or I’d read things in the newspaper, she was very quick to tell me that I don’t need to worry about anything I read, see or hear from anyone other than my mom or my dad. And that my dad loved me. And that although he may have some demons he was fighting, he was a good man and loved me. And that’s all I needed to know. So I was very grateful that she was so positive and supportive about those kind of things. Georgette: Well, to be honest, I was concerned about other people, and how they were going to react, only because I know a lot of people, they expect [the actors] to sound just like my mom and dad. I honestly never expected that. I know that there’s only one mom and one dad out there that could sing and make the music that they made.

I find it incredibly brave that [Michael and Jessica] did what they did, and I think that they really pulled it off. I think that they sounded very natural. And I know as an artist myself, that if you don’t have an emotional connection and you don’t do the music yourself, it’s really hard to pull that off. I can only imagine that as an actor or actress, if you’re trying to portray someone and you’re lip-syncing, it doesn’t really come across in the same way as if you yourself can sing the song and naturally connect to it, and it looks more natural and feels more natural. So I think it was great what they did. I'm very happy with that.

C&I: But what sort of emotional resonance did it have for you to hear these two people who looked so much like your mom and dad singing a song by mom and dad?

Georgette: It was definitely an emotional rollercoaster. They were kind enough to invite me on set for a few days. I was able to watch them record some of those scenes. And one in particular was very emotional for me. They allowed me actually to be a part of one, to be a background singer in the back of the scene. And it was difficult to keep myself together and not be overly emotional while I watched them film it because it brought up so many emotions of them being together.

I feel like my parents struggled so much. You could tell, just watching them even after they were divorced, that they cared about each other and wanted to be together, but it just didn’t happen for them. And so it was very difficult to see that being played out in front of me because I felt so sad for both of them, because they were unable to live the lives that they had really wanted to live.

Georgette: I probably have to say the very first song they did together, “Take Me.” My dad had originally recorded it as a solo, because he wrote it. But it was so different when he sang it with mom. Both of them had such unique sounds — and, obviously, there was the emotional connection they had. I just have always loved that song so much. They have been so many others, of course, that I love. But if I had to pick just one, I’d probably say “Take Me.”

As far as solo songs, I always say for mom — it’s hard to narrow it down to just one. I always say the two “’Til” songs, which are “’Til I Get It Right” and “’Til I Can Make It On My Own.” Mom’s favorite song was “’Til I Can Make It On My Own,” because she had written that after my dad and her had broken up, and she really felt like she was living the lyrics for that song. Because she really did. For a while after they divorced, they still tried to date. I mean, they would still get together and try to go out and have dinner and write and do things. And it just unfortunately never did work.

C&I: And your choice for your father?

Georgette: For dad, I’d say “Walk Through This World With Me.” But I have to add a second sentimental favorite just because of my children. My children would have to drive for 45 minutes to school every morning. So we’d listen to the radio. And occasionally, songs would come on. And at the time their grandpa had “The One I Loved Back Then,” though everyone called it “The Corvette Song.” And my boys loved that song so much. So we would sing that a lot. It’s a sentimental favorite for sure.

C&I: With two fantastic, iconic, legendary, whatever hyperbole you want to use parents, were you at all hesitant about forging ahead and launching your own career as a singer? I mean, were there times when you thought, “Maybe I should just open a dry cleaning store or something?”

Georgette: Absolutely. A thousand percent. In fact, I was a registered nurse for 17 years. I steered clear of music as best I could for a very long time. I had been singing on stage with one or both my parents since I was three. I recorded a song with my dad at 10 and I loved music. I’ve written since I was a child. But I was so terrified, I kept thinking, “How in the world can I possibly step into those shoes?” Or, “How will I be judged?”

I was very aware that every time people would see me, they’d think: “Oh, I wonder if she phrases like her dad?” Or, “I wonder if she sounds like her mom?” And I just didn’t think that could be a favorable thing. They were legends in their field. So I steered away from it until I was much older. And after my mom died — well, I think once you get to 30, at some point you start realizing things aren’t necessarily all that critical. That if people don’t like me, that’s OK.

I got to a point where I could accept myself for what I can do for me as me. And as much as I love to honor my parents and sing their music, I know that I can’t sing their music as well as I sing my own. So it just was something I had to accept and move forward with. And I’m happy in that place now. But I was terrified for most of my life, really, about how I was going to compare to them.

C&I: Was that some of the emotion that inspired your recording “I Just Don’t Give a Damn” a few years back?

Georgette: [Laughs] Yeah. I mean, I tell you, I love that song, too, because my dad wrote it with a guy named Jimmy Peppers. And it was an older song of my dad’s that I discovered only as I got older. And I totally loved that, because the lyrics really were something I could connect to. At some point, you just kind of have to say that. Right? You just kind of have to be okay with who you are. And not worry about what everybody else thinks.