A hometown tour with the award-winning actor.

The City Different — Santa Fe — is Wes Studi’s official headquarters. It’s where you can often find one of the country’s greatest actors and entertainers. It’s where the Native American star — who was recently named a 2019 honorary Oscar recipient — filmed the 1890s period western Hostiles. And it’s where he’s lived, just outside the action on a ranch, for two decades.

A Cherokee who fluently speaks his ancestral language, Studi is revered for the work that goes into his compelling characters. Before news of the honorary Oscar, which will be bestowed upon him in October, he had already been inducted into the Hall of Great Western Performers.

Back when he was relatively unknown, Studi appeared in the 1989 comedy-drama Powwow Highway, followed in 1990 by a turn in Dances With Wolves as “the toughest Pawnee.” He made a bigger name for himself with his fierce portrayal of the duplicitous Huron chief Magua in the 1992 film version of James Fenimore Cooper’s French and Indian War epic The Last of the Mohicans. 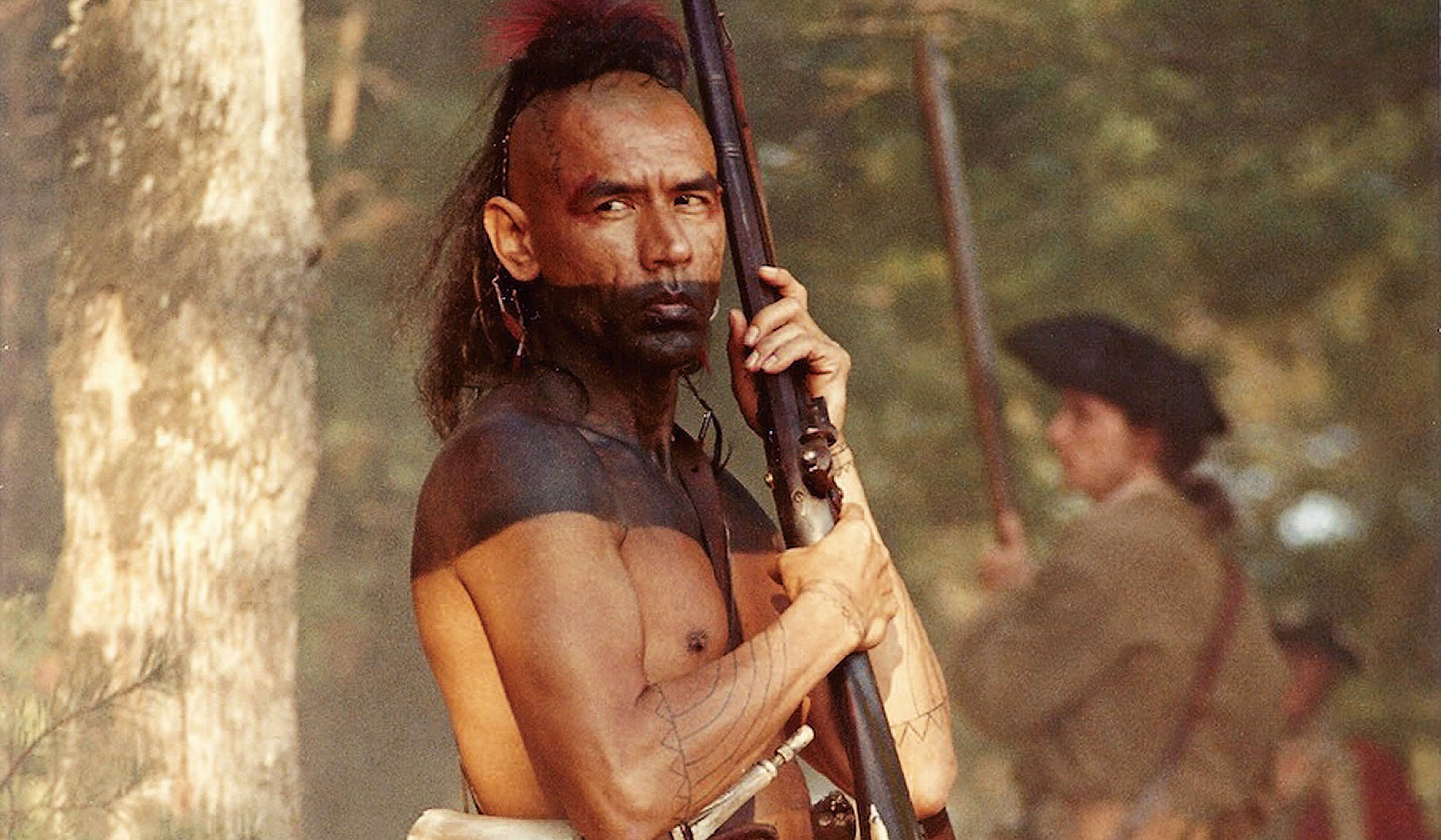 Among many other roles in Studi’s distinguished career, he also starred in Geronimo: An American Legend as the lead, and in 2015 he re-teamed with his Seraphim Falls costar Liam Neeson in the Seth MacFarlane-directed comedy A Million Ways to Die in the West. Studi also graced the acclaimed television series Hell on Wheels for two seasons as Chief Many Horses.

Most recently Studi costarred as Capt. Mica in A Dog’s Way Home, the story of a lost dog’s search for her owner through hundreds of miles of Colorado wilderness. He’s just lent his voice to Vine Deloria Jr.’s The World We Used to Live In: Remembering the Powers of the Medicine Men for the newly launched Indigenous Audio Books. And this summer he’s been hosting HDNet’s Sunday western series.

On the increasingly rare occasions that he’s not working, chances are you can find the star back at the ranch in Santa Fe. We spoke with Studi about the continuing devotion to his longtime home, and he even offered a few tips on what to do when we’re there next.

Cowboys & Indians: We love Santa Fe’s stunning vistas, beautiful skies, culture, food, adobes, shopping — we could go on and on. You’ve lived on a small ranch on the outskirts of town for more than 20 years. What attracted you to the area?

Wes Studi: What attracted me initially to the Santa Fe area was the lack of humidity due to the altitude. And I also felt that Santa Fe was really a large city which existed inside a small town. That’s what attracted me 23 years ago, but I soon discovered many more great things about the area as well. [My family and I] lived in town initially, but we moved to our ranchito on the outskirts of Santa Fe 17 years ago and can’t think of another place we’d rather live. C&I: Santa Fe is known as such an art Mecca. Are there some particular galleries you’d recommend? And how about the Santa Fe Indian Market every mid-August?
Studi: I don’t really have a favorite gallery, as there are so many great ones here, but a favorite shop is Designs by Erica, which features unusual purses, and Sorrell Sky Gallery, which spotlights beautiful and unique jewelry. Indian Market is absolutely amazing, overwhelming, growing every year, and hard to put into words. I love the fry bread at the market. And it is a place to buy gifts, paintings, textiles, and works of every kind — the epitome of the Indian art world.

C&I: Have you been to the Haute Couture Fashion Show there?
Studi: One of my favorite events at Indian Market is the Native fashion show. It’s held at the Convention Center, produced by my friend Amber-Dawn Bear Robe. Held on Sunday, the fashion show is standing-room only and features at least a dozen designers. Some of the fashions have a New York look or Southern California style, but all have an Indian background or influence of some kind. So provocative and exciting.

C&I: Have you ever been to the Santa Fe Opera House? What an extraordinary outdoor venue with those beautiful views of the hillsides.
Studi: The Santa Fe Opera House is a great place to hear music — made for sound, and the acoustics are absolutely extravagant. I’ve never been to an opera there, but I’ve been to several shows, most recently TajMo, where blues musicians Taj Mahal and Keb’ Mo’ played together. The first time we were there we saw Lyle Lovett, and that was a great show as well. C&I: There are so many great hotels in Santa Fe near the plaza and on the outskirts. What are some of your favorite places to stay or have friends stay at?
Studi: There are a lot of Airbnbs that are up north of town toward the ski valley. But as far as hotels are concerned, I tend to go the traditional route and really like La Fonda and Eldorado, which are located in the center of town. One of the special parts of La Fonda is their tower, where we will sometimes go at the end of the day to enjoy the sunset and a cocktail and perhaps appetizers. I like the historic aspect of the hotel — it has been around almost as long as Santa Fe.

La Fonda, which was an original Harvey House, is the first place we listened to local music legend Bill Hearne soon after we arrived. When I had a band we even played there, and some of the methods we had to use to get our equipment up to the second floor ballroom included going through areas we didn’t know existed, walking around, and getting lost. We got into an elevator to go up to the second floor, where we were somehow face to face with the other band members!

C&I: The town is also known for its food, from swanky restaurants to roadside diners to food trucks. What have been some of your memorable dining experiences in Santa Fe?
Studi: Like New York and Los Angeles, you can find practically any type of cuisine you want here. I particularly like the sea bass at Coyote Café, and most anything at the more upscale Geronimo’s. For really good down-home Northern New Mexico kind of food I suggest Los Amigos on North Rodeo, which serves wonderful homemade green chile stew and sopapillas. The downtown Plaza Cafe is also a measure of the Northern New Mexico kind of food we have here. I rate every restaurant by how good their green chile stew is, as well as their stuffed sopapillas. C&I: We know that Santa Fe and New Mexico in general are known for spectacular sunsets. Are there some special spots you and your wife like to go?
Studi: We have some friends who live up in the Sangre de Cristo foothills and have an almost panoramic view of the Jemez Mountains, where a brilliant sunset will travel from east to west. And we have a pretty great view of the sunsets over those mountains from our place as well. But it’s not just sunsets. A year ago New Year’s Day, I went outside early in the morning to get the paper and looked east to the Sangre de Cristos and saw one of the most beautiful sunrises I’ve ever seen. I would suggest visitors go to the Cross of the Martyrs or the rooftop of the La Fonda Hotel, both of which are downtown on the square.

C&I: How about an off-the-beaten-track adventure that perhaps only the locals would know about?
Studi: It may now be on the beaten path, but the tiny town of Madrid, in Santa Fe County, which is an 1880s mining town along the Turquoise Trail, was for sale when we first moved to Santa Fe, and the asking price was about $200,000. The old stores and houses have been converted to shops and galleries, and the old saloon, now called the Mine Shaft, has live music and dates back to the copper-mining days.