The veteran actor is working overtime on the small screen, stepping into a long-deserved leading role for AMC's western mystery series Dark Winds.

Zahn McClarnon is ready for his close up.

After establishing himself as an exceptionally versatile actor and an attention-grabbing screen presence in supporting roles, and amassing a resume highlighted by such major TV credits as Longmire, The Son, Westworld, and Fargo, the 55-year-old actor is front and center as the star of Dark Winds, the acclaimed AMC drama based on the popular Leaphorn & Chee mystery novels by Tony Hillerman. McClarnon propels the neo-noirish limited-run series with a performance fueled by equal measures of focused intensity, dry wit, slow-burning anger, and repressed anguish as Lieutenant Joe Leaphorn, a dedicated lawman at a remote Navajo Nation outpost in 1971. While trying to solve a local double murder — and, maybe, connect it to a big-city bank robbery — Leaphorn relies on the assistance of a trusted associate, Navajo police Sgt. Bernadette Manuelito (Jessica Matten), and a possibly untrustworthy new officer, Jim Chee (Kiowa Gordon). He's something of a workaholic, but we're left to assume that solving crimes also is a way for Leaphorn to distract himself from the death of his son and the widening rift between himself and his wife, Emma (Deanna Allison).

Inspired by Hillerman's Listening Woman, and co-produced by Robert Redford and Game of Thrones author George R.R. Martin, Dark Winds is one of three TV projects keeping McClarnon gainfully employed these days. He's also in his second season as Officer Big in the sitcome Reservation Dogs, and soon will be seen again as William Lopez — a role he first played in the Marvel Cinematic Universe series Hawkeye — in Echo, a spinoff that will be the first series in the MCU driven by a Native American hero (Alaqua Cox). So, no kidding, we consider ourselves fortunate that he could fit an interview with C&I into his busy schedule. Here are some highlights from our conversation, edited for clarity and brevity. Cowboys & Indians: Whenever you portray a famous literary figure like Joe Leaphorn, you're dealing with the expectation and assumptions of readers who have their own ideas about the character. Have you seen that as a challenge while working on Dark Winds?

Zahn McClarnon: Well, sure, there's always a weight when you're taking on a character from a book, because I think that the readers obviously have expectations of how they see that character. But then you have to bring your own choices to that character, and your research of that character and their backstories. Fortunately, I had the support of George Martin, and Robert Redford and [director] Chris Eyre, and the rest of our team. You just want to show up and be as honest as possible, and try to make the character as true as possible.  You obviously have a lot of research material for that character. And we tried to stick to that as much as we possibly could. But at the same time, we are adapting these books, and we've taken our own liberties. We stuck to the book as much as we can in terms of the characters, but we had to veer off at certain points. But I'm proud of what we did and I'm hoping that people do enjoy these characters.

C&I: Throughout the series' six episodes, you develop a sometimes edgy, sometimes friendly relationship with Kiowa Gordon, who co-stars as Deputy Jim Chee. There's even a hint of a budding father-son relationship. How did the two of you prepare to make that give-and-take so credible and compelling? I suppose it starts with the script ...

McClarnon: We rehearsed a lot together off-camera, obviously. And like you said, there is a script. But also, I've known Kiowa Gordon for quite a few years. We even did a series together, called The Red Road. And we're pretty much neighbors: He lives in Studio City, and I'm right next door in the Toluca Lake area. So I see him when we're not working, as well. I've always respected Kiowa and his work, and I'm glad that he came on as Chee. We just spent some time together off set, rehearsing. And I also had an acting coach there with me, a good friend of mine named Rob Tepper. He's also in the show as an actor. And Rob helped us out with the relationship points and the arcs with Chee and Joe Leaphorn. C&I: Let's go back a few years. You were born in Colorado, the son of a Hunkpapa Lakota mother and a father of Irish ancestry. But you moved around a lot during your formative years. Was that because of your father's job?

McClarnon: That's right. He worked with the National Park Service — and so I grew up in the national parks, like Glacier National Park and Yellowstone National Park. And then Nebraska, which is the Midwest Region office for the Park Service. The first city I lived in was Omaha. I was 13, I think, when I moved there for the first time — and it was quite a shock. But I grew up in some pretty spectacular places. And I feel very fortunate that I did. And yes, I moved quite a bit, had to leave friends, had to leave schools. And it formed my later life, where I feel like I have a hard time staying in one place. I really do.

See, I like being on the road. I like traveling. I have a place in Nebraska, I have a place in Los Angeles, and I hope to get a place down in Santa Fe as well. Maybe I'll just RV around when I retire from the business — if I ever retire. But it's certainly a gypsy life. I certainly feel like a gypsy. I stay in a lot of motels and I work in different states, and I enjoy that very much. Like I said, I get a bit antsy staying in one place at one time for too long of a period.

C&I: Of course, that works well for you if you're pursuing the life of an actor, moving from one location to the next.

McClarnon: Yeah. You have a family for a few months, and then you move on to the next family. But I'll be honest with you: I've established some of my most important relationships through this business. And I stay in touch with a lot of the people that I've worked with. Some of my closest friends are fellow actors that I've worked with, and fellow directors and producers. I feel very, very fortunate to meet so many people and to have so many people in my life.

I like being on the road. I like traveling. I have a place in Nebraska, I have a place in Los Angeles, and I hope to get a place down in Santa Fe as well. Maybe I'll just RV around when I retire from the business — if I ever retire. But it's certainly a gypsy life.

C&I: Is it true you first became interested in acting while appearing in a high school production of Jesus Christ Superstar?

McClarnon: Actually, it was a local community theater production. I was in my early 20s, and still trying to figure out things. I had lived in L.A. for a couple of years, and I moved back to Nebraska to be with my family. And I was just finding my way. Jesus Christ Superstarwas a huge inspiration for me while I was growing up. I had the album, with Andrew Lloyd Weber's music and Time Rice's lyrics. And I used to listen to that album constantly. My dad turned me onto it when I was quite young, when I was seven or eight years old. I fell in love with the voices on that album. And I just love that rock opera sound.

Well, I saw them advertising in a local paper that they're putting on a production of it. I'm not a singer, but I went out to the audition and I sang anyway. I didn't get a lead part, but they put me in the choir to play one of the apostles. And I fell in love with theater immediately, going to rehearsal every day and being up on stage. And I thought, "This is interesting. I like this. Maybe I'll move back to Los Angeles and try to become an actor."

And that's what I did. I did some local commercials in Nebraska after the play. But then I just jumped in the car and moved back to Los Angeles and gave it a shot. And 30 years later, I'm still working. C&I: Do you remember the moment when you first thought "Hey, I really could make a living at this?"

McClarnon: Yeah. I think it was while I was studying acting in Los Angeles. I'd go to a few classes each week, and study with different teachers. And I started realizing at a certain point while watching other actors that, as good as they were, I could possibly make a career out of this. And then after I started landing jobs, I knew that if I stuck with it, and focused on it, and made it my life, that I would be able to make a living as an actor.

I pretty much started working immediately when I moved to Los Angeles. There are a lot of types out there, but not a lot of my type. I'm pretty ambiguous. Yes, I'm Native American, and I'm Irish. But I played Latino roles early in my career. I have a pretty ambiguous look — and I started working immediately. So as soon as I got my first gig, I'm like, "Uh-huh!" And then after my second gig, my third gig, I started realizing that, yes, I could do this. And again, I'm extremely fortunate to be still doing it after 30 years. 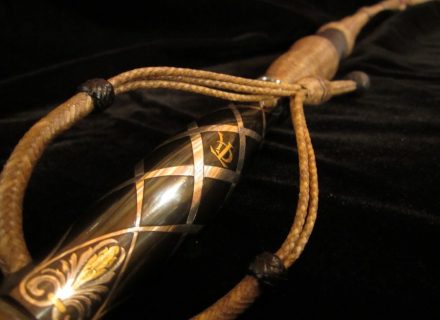