We asked for your best shots of the American West, and you more than delivered.

You should see the photographic wonderland that our offices in Dallas become when we’re voting on C&I’s annual Visions of the West photo contest. Our color printer gets crazy hot from the continuous demand as the walls fill with image after image of the people and places, flora and fauna that readers have captured, transforming our space into a veritable gallery.

That’s the overall effect — a wondrous, wide-ranging walk through the West. But get up close for an isolated view of just one image, and you’re transported into a singular story, a unique moment.

That was certainly the hot-pink experience of gazing at Chad Coppess’ winning photograph, Powerful Connections, of Ojibwe artist-dancer Michelle Reed. “Michelle is from Northern Michigan, but she spends a lot of time in South Dakota,” says Coppess, who is from the Mount Rushmore State. The two originally met when Reed was in South Dakota dancing with the Indigenous music group Brulé.

“This particular photo came about when Michelle was an artist-in-residence teaching sewing and beading at the Cheyenne River Youth Project in Eagle Butte, South Dakota,” Coppess says. “The Youth Project sponsors an event each year called Red Can Graffiti Jam, where artists paint murals throughout the town. We wandered around town taking photos of her in front of various murals. The mural in the image is by graffiti artist Dwayne ‘Dwayno Insano’ Manuel; the woman the mural depicts is Redbird, wife of Chief Shot-in-the-Eye and one of the most recognized Lakota women warriors who fought at Little Bighorn. The colors of the mural just happened to match the regalia Michelle was wearing that day.”

For her part, Reed says “the picture represents the jingle dress, the healing dress, and the sweetgrass — the medicine we carry is a part of that. Healing and sharing this medicine through Chad’s photographs — while also sharing the beauty of the places he travels to and brings recognition to — is why I feel this photo has so much life and is so powerful.”

“If you leave it up to me to choose what to shoot, it’s going to be Western — cowboys and Indians if you will,” he says. “I love shooting rodeo, cowboys on ranches, powwows, and Native Americans in any kind of situation. Variety is the key to photography in South Dakota, whether we are talking about landscapes, weather, wildlife, or people. From the very western landscapes of the Badlands and Black Hills to farm country and the urban feel of the eastern side of the state, there’s never a lack of things to photograph.”

That goes for all of the varied West: There’s no end to the photogenic potential out there. We hope that perusing these photos will inspire you to pick up your camera and start shooting.

Visions of the West Winners Comin' At Ya / Kim Steed The selection process: C&I staff and contributors blind-voted in each category and for the grand-prize winner, meaning no photographer names were included with images. 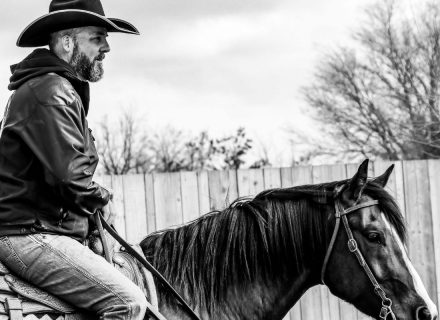