Dave Duquette takes a stand for rodeo tradition and the Western lifestyle with his organization’s innovative and proactive Western Sports Industry Coalition.

Seeing the logos of most every major organization in rodeo scrolling across the screen of a single website will make any rodeo fan stop and take notice. Seemingly banding together without industry rivalry, the names of some of the most prominent groups in the sport appear on the Western Justice website under the organization’s innovative and proactive Western Sports Industry Coalition.

Western Justice defines itself as a membership-based (c)(4)nonprofit organization that engages in work related to political action in an effort to preserve and protect the Western lifestyle and related livelihoods and industry events. One of the group’s main initiatives is the Western Sports Industry Coalition, formed on the heels of an attempt to ban the sport of rodeo in the city of Los Angeles, explains president of Western Justice Dave Duquette.

Duquette felt the Western horse industry, which he cites as the United States’ biggest domestic horse base, was ill-represented on Capitol Hill. After being involved with other political-action groups over the years, he decided to start his own in 2020. Western Justice would be a membership-based organization so even small donors could leverage their ability to help. “The people that are the most passionate about wanting to help out are generally people who don’t have any extra money at all,” Duquette says. “Horse people, if you’re not already wealthy to start with, you spend every last dime of your disposable income on your horses,” he says only half-joking. His membership-based organization allows like-minded people of all means to be involved and have their voices and values heard. “The Western lifestyle world could be, without a doubt, the strongest, most powerful lobby group in the United States,” Duquette says. “We could go fix so much if we just came together under one umbrella and showed solidarity.”

Western Justice’s efforts have attracted some high-profile support from well-known rodeo athletes, horsemen, and even Forrie J. Smith, the former rodeo-cowboy-turned-actor who plays Lloyd on the hit television series Yellowstone. But it’s not just about attracting the support of big names, according to Duquette. He’s hoping to make everyone aware of the work of Western Justice.

Spreading awareness is a role Duquette has perfected over his years of publicizing issues and lobbying in Washington. His work in the capital takes him far from his home in Hermiston in Eastern Oregon. And working the halls of Congress is a long way from serving in the United States Marine Corps and working as a ranch cowboy and horse trainer for two decades.

But when he perceived that his way of life was coming under fire, he turned to lobbying 15 years ago. “I started seeing that certain animal-rights groups were trying to take down our industry, and there weren’t a lot of people standing up to preserve the tradition,” says Duquette, who calls himself fairly stubborn. “I’ve got a lot of try in me,” he says, and that perseverance helped him persist in educating others in the horse industry about the problems he saw on the horizon.

“The Western lifestyle world could be, without a doubt, the strongest, most powerful lobby group in the United States,” Duquette says. “We could go fix so much if we just came together under one umbrella and showed solidarity.”

At first, he says, a lot of people thought he was crazy for sounding an alarm. But awareness grew, eventually leading to uniting a wide range of Western organizations under the umbrella of Western Justice to meet the challenges. The dangers to the industry were and remain far-ranging, according to Duquette. Beyond the attempted ban of rodeo events, he points out that some legislation could alter, or even end, a horseman’s ability to ride or show horses.

The best defense for Duquette is a strong offense. “We’re growing — not to the numbers I want to be yet, but I’m hoping that’s going to change,” he says. “We’re starting to make a lot of headway, and a lot more people are understanding the value of grassroots.”

Duquette credits the expertise of his largely volunteer team — in everything from the horse and ranching industry to social media marketing and communications — with helping Western Justice gain steam: “I’ve got a great team. They believe in the cause, and they believe in what we’re doing.”

And he hopes their work inspires others, especially young people, to be proactive in protecting and promoting the Western lifestyle and what it stands for, no matter the odds against them. 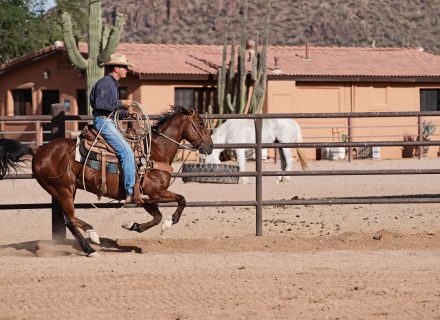