Helen Thompson knows what she’s talking about—especially when it comes to interior design and architecture. A nationally known writer, she’s been incubating her new book, Santa Fe Modern: Contemporary Design in the High Desert, for 30 years. In between the first inkling of the book and its publication in November came the two other titles in her trilogy: Marfa Modern: Artistic Interiors of the West Texas High Desert and Texas Made/Texas Modern: The House and the Land.

We talked with Thompson about a new book born of an old idea, Santa Fe architecture and design, and why it’s actually Western to make friends with modern.

Cowboys & Indians: Your name is known to lots of readers from your contributions to Texas Monthly, Metropolitan Home, Elle Decor, Architectural Digest, House Beautiful, Martha Stewart Living, Western Interiors, Traditional Home, and Veranda. You’re a prolific book author as well. Congrats on the gorgeous, smart new one, and on completing your trilogy. What got a native Texan, Santa Fe transplant like you interested in modern architecture and design?
Helen Thompson: It goes back 30 years, to when my friend Elizabeth Glassman, who was the director of the O’Keeffe Museum, took me out to Ghost Ranch [O’Keeffe’s former home and studio in Abiquiu, New Mexico]. I was so shocked to see all that modern furniture and modern art against the rustic setting.That was the seed for this book. It was so powerful to see those things juxtaposed. The question I came away with and kept thinking about was, Why do they look so right together?

C&I: And why do they?
Thompson: The more I researched modern work, the more I saw antecedents in the ancestral Puebloan culture and that whole network of ancient cliff dwellings that are connected with a complex system of roads in the Southwest. Those dwellings, inserted in mountainsides and cliffsides, are, in hindsight, streamlined and elegant. They look very modern. The building techniques are still being used, and the settings are still here.You can see why that shape still works.

I think of the aesthetic that Mabel Dodge Luhan imported by bringing O’Keeffe and other artists to her home and “salon” in Taos. Luhan is credited as a driving force behind American modernism. Her guests were very radical and could see that the New Mexico landscape could be reinterpreted in color. They could see the forms in the terrain and abstracted them and used them in their art.

C&I: It’s the aesthetic as facilitated by Luhan and translated by O’Keeffe?
Thompson: O’Keeffe bought two houses and decorated them this way. That’s the moment when modern interior design and architecture make it quietly into New Mexico. She clipped the vigas and canales off on the exterior, making the building very streamlined. A lot of O’Keeffe’s objects are land form, earth form. She organized her things against earthy things in a real resonant juxtaposition. Suddenly these old adobes are very modern. It seems like a natural progression once you think of it that way.

C&I: Santa Fe is unique....
Thompson: It’s the largest collection of Indigenous architecture in the United States. It’s not like the kind of Western architecture you see elsewhere. The style is very specific to here. It’s earth- friendly, and all about connection to the environment and the sky. I like to call it the good kind of modernism. It’s very organized. For me, modern here just looks like it belongs here. It’s made out of the same dirt that the land is.

C&I: What’s the visual common denominator between Texas and Santa Fe Modern? Is there one?
Thompson: Yes. When I wrote all the books—including a new one I just collaborated on about Lake/Flato architects, Respecting the Land—there was a common thread. I realized that about half of the time I was writing about houses and architecture, and the other half of the time I was writing about the geology. It was all site-specific. These places are built to belong just where they are. They are not a steel-and-glass “Parade of Homes” from elsewhere. They have the profile of modernism, but the basic materials are right from where the site is. That’s the common thread. Lake/Flato was sometimes regarded as regional, but what their architecture really is, is site-specific. In Texas and in Santa Fe, the history and the land are part of the design DNA.

For me, modern here just looks like it belongs here. It’s made out of the same dirt that the land is.

C&I: Let’s talk Santa Fe and about John Gaw Meem. As influential as O’Keeffe is, he’s another giant, especially in Santa Fe.
Thompson: He’s actually a good little knuckle on which all of this turns. Lauren Hunt of Hunt Modern has referred to Meem as an early modernist. He’s thought of as reviving Pueblo style. He’s so important in the history of Santa Fe because he devised the architectural regulations. That’s why you don’t see any malls in [the] historic district. He saved it. He was instrumental in preserving the look of Santa Fe. People grumble because they think he looked backward too much. But he preserved that connection even while his work is very modern. He’s the connecting piece between a very traditional look and a much sleeker, more refined profile. I don’t think people think of him that way, but I do.

C&I: We’ve excerpted the chapter from Santa Fe Modern about a Pueblo Revival home by John Gaw Meem. Every chapter in the book is different. What unites them?
Thompson: All of the houses in the book are site-specific. Some are new; some are renovations. For each chapter, I try to talk about something different that’s characteristic in the city. They are all examples of how everything here is imperfect or exceptional. In Western architecture, we have big columns and imposing facades — that’s not what it’s like here. These houses are very domestic and follow a family life. Each house talks about something specific to the area and to the families that have inhabited them over the years. James David had a house that they kept adding on to organically over the years. That building technique is very traditional in Pueblo style, added on to as the family grows. David and Gary Peese kept the original vigas, which are now the dining room. They know who owned the house throughout — the history, the circumstance of the original adobe hand-built by the son-in-law of the lady who originally owned it. These houses have stories. The imperfection is living and wonderful.

C&I: A lot of people don’t like modern — or don’t think they do because of the examples they’ve seen. Where should people start to learn to appreciate the other kind of modern?
Thompson: The modernism that people have in mind is probably the steel-and-glass and hard angle. But there was another kind that was artisanal that developed at the same time. It’s much more appealing. It kept silhouettes and tenets — Le Corbusier’s five points for architecture [pilotis (piers or supporting columns), the roof garden, free plan, free façade, and the horizontal (clerestory) window] — but was organic and site-specific. You can look at a glass house and reimagine it with stone in Texas. The modernism that works is this more artisanal variety that is full of handmade details. That’s the style that has gotten popular in Santa Fe. There’s something clarifying about it. It’s not the kind that looks like some horrible spacecraft landed. Instead, it’s earth-friendly and has a real simplicity and purity.

C&I: How could someone get the look of Santa Fe Modern? What would be some essentials?
Thompson: I’d start with the principles of editing and organizing. Georgia O’Keeffe has lots of little things, but she’s got them organized and grouped into collections. Get your stuff out of the middle of the room and off of surfaces so they actually become a texture rather than objects. Cowhide rugs and runners and then maybe rough linen for upholstery, even velvet, leather — things that you want to touch. Anything touchable, anything that has a variable texture that catches light. I think organization is probably the key. And then all of your paintings — organize them in a grid maybe ... three on top, three on bottom, so the whole piece is organized even if it’s a bunch of little items. Organize by type and place. The owners of one of the homes in the book had a pottery and wire-basket collection. They made shelving with a sliding door for all of it. When they want to open the doors to appreciate the collection, they can. It’s lit for an almost-museum-like presentation. Organizing schemes like that are actually pretty easy to do.

C&I: After researching and writing about the 20 homes in the book and the many wonderful things they contained, what has stuck with you?
Thompson: Everything that I’ve loved was kind of intangible. More than a particular thing, it was the feeling they all expressed. It partly has to do with the houses being made out of earth and rock. I think you feel protected in those houses, loved in those houses. You’re part of the world around you in those houses. In the living room, the Hunts retained the original mullioned windows and the pine plank ceiling and vigas. A glass chandelier by Mauri Almari hangs above the Jumbo marble coffee table by Gae Aulenti; facing it are two Henning Kjaernulf Razor Blade oak chairs. Near the fireplace is a grass-seated Nakashima stool. The whimsical chair was recently identified as a Clam chair by the little-known Danish designer Philip Arctander. Homeowner Lauren Hunt designed the minimalist landscape and the stone wall, emphasizing existing sharp lines to give the house a modern feeling. Jasper Johns’ lithograph Flag (Moratorium), 1969, is the focal point of the hall. On the right is an Italian bench and above a light fixture by Finnish artist Paavo Tynell, both from the 1940s. The rug is an early 20th-century gabbeh kilim. The dining room features the Danish ebonized wood cupboard, 1627, that Lauren Hunt purchased specifically for the house. To the left is a stoneware vase by Claude Conover. The pine floors in the dining room are original but now stained ebony, a dramatic contrast to the white plaster walls. The Nakashima table is surrounded by Kai Kristiansen chairs upholstered in leather. All are illuminated by a brass and opaline- glass Stilnovo pendant. A painting by Barbara Cathcart hangs above the De La Espada bed. The cane chair is from Hunt Modern’s Chandigarh line, re-editions of mid-century designs for the Indian planned city. 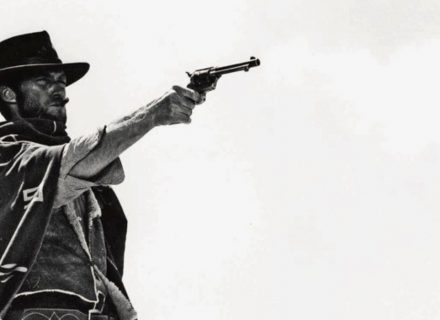