Warning: This is an overview of Episode 101 of 1883, so there will be scads of spoilers here. We strongly recommend that you not read this if you have not yet watched the episode. If you do read it before watching the episode, and then complain about spoilers, we’ll be forced to ask some badass Pinkertons to pay you a call. Sorry, but those are the rules.

A great journey westward begins with a diverse array of traveling companions. Here are our five takeaways from the aptly titled “1883,” Episode 101 of 1883.

Kudos to writer-director Taylor Sheridan for quickly establishing vividly drawn characters — and, better still, generating rooting interest in some of them — during a premiere episode that, truth to tell, could be enjoyed even by people who have never watched a minute of Yellowstone. Yes, we know that the little John Dutton here played by Audie Rick will grow up to be the grandfather of the John Dutton played by Kevin Costner on Sheridan’s other series. But it looks like we can safely tell folks who don’t know that, but who do like westerns, that they don’t need to binge watch Yellowstone before they tune into 1883. Unless, of course, they really want to.

The opening minutes of Episode 101 suggest that Sheridan will be walking a tricky tightrope here, balancing traditional western tropes with more revisionist notions about how the West was won — or, depending on your point of view, lost. In what appeared to be a flashforward — to 1884? — Elsa (Isabel May), daughter of James (Tim McGraw) and Margaret Dutton (Faith Hill), evidently was the sole white survivor of an attack by Indians on a wagon train. (Immediately revealing  her role as series narrator, she voice-overed: “If this is hell, and I am in it — I must be a demon, too!”) But even as she struggled to stay alive, one of her attackers reminded her that she and fellow pioneers are the unwelcome intruders.   Graham Greene and Martin Sensmeier have been announced as featured players in upcoming episodes, and it’s doubtful that either one would sign on for a series that denigrates Indigenous People. Still, this is a series about pioneer settlers, so… Stay tuned for further developments.

In his very first scene, a years-ago flashback where his character, Shea Brennan, bids a fiery farewell to his wife and child, both victims of smallpox, Sam Elliott was so damn good, it was almost scary. Some great actors don’t need dialogue to break your heart — Elliott is one of them. In the here and now of 1883, Brennan continues to be so haunted by anguishing memories that, based on what we see in Episode 101, Thomas (LaMonica Garrett) — Brennan’s partner and fellow Pinkerton — must routinely talk his buddy out of suicide with tough-love passive-aggressiveness. (If Brennan’s going to shoot himself while they’re riding through the wilderness, “Think on it quick. If I’m digging a hole, I’d rather do it before the sun’s high.”) Fortunately, both men were able to remain alive and reasonably well, and made their way to Fort Worth, where they met the German pioneers whose wagon train they’ve been hired to guide to Oregon.

Along the way to Fort Worth, they witnessed an impressive display of badassery as James Dutton single-handed annihilated the crew of horse thieves bent on seizing his wagon and ending his life. James was understandably upset when he realized Brennan and Thomas did nothing but witness. (Brennan shrugged off James’s snarling observation: “You look like you had it figured!”) So it wasn’t entirely surprising when, after arriving in Fort Worth to meet his family for their own westward journey, James initially turned down the Pinkertons’ offer to accompany — for a price — their wagon train. But he changed his mind after spending a rough day and rougher night in the violent Texas city, during which time he gunned down a galoot who tried to rape his daughter in her hotel room. James agreed to join the wagon train with his extended family — including his sister-in-law Claire (Dawn Olivieri), a widowed scold, and her daughter Mary (Emma Malouff), her sullen daughter — but not as a hired gun. “I ain’t working for you,” he cautioned Brennan. “I’m just riding with you.”

Brennan readily accepted James’ terms because, as he and Thomas determined during their initial meeting with the German settlers, all of them were singularly ill-prepared for cross-country travel through dangerous territory, lacking such basic skills as dealing with horses and handling guns. Indeed, only one member of the group, Josef (Marc Rissmann), could speak English. In short, Brennan and Thomas needed all the help they could get, especially after being turned down — in this episode, at least — by cowboys Ennis (Eric Nelsen) and (Wade James Landry Hébert). Of course, both of the actors playing those characters appear prominently in the opening credits, so it’s a cinch both those characters will change their minds as well. What else might the future bring? Well, with all due respect to McGraw, Hill and May, who give solid and persuasive performances, we’re looking forward to more spirited give and take between Elliott and Garrett, who may be the very best Odd Couple to get their cowboy on since Don Murray and Otis Young rode together in the 1968-69 TV series The Outcasts. From the C&I Studio: Sam Elliott Talks About 1883 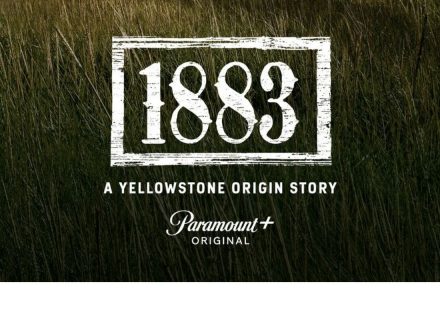