The music of trailblazing bluegrass band The Dillards helped define Americana as it made its way from The Andy Griffith Show into the hearts of music fans everywhere.

You might know them as The Darlings from The Andy Griffith Show. In reality, the pickers and singers who gathered around in Mayberry with Andy, Aunt Bee, and Barney Fife are The Dillards, a real-life and surprisingly influential bluegrass/roots band that made regular appearances on the hit TV show in the 1960s and went on to gain the attention of some of the music industry's top musicians and artists.

Watch The Darlings perform “Dooley” on The Andy Griffith Show.

Now entering their seventh decade in the industry, The Dillards are showcasing their impact with a new record, Old Road New Again, that features an impressive list of guest artists. The collection includes collaborations with Don Henley, Ricky Skaggs, Sharon and Cheryl White, Herb Pedersen, Bernie Leadon, and Sam Bush.

“Old Road New Again is a bookend to The Dillards’ 1968 Elektra release Wheatstraw Suite, which had a major influence on artists such as The Eagles, the Byrds, and others,” says founding member Rodney Dillard.

Check out the world premiere of the video for “Always Gonna Be You.”

In the video, you can hear Eagles member Don Henley’s vocals alongside The Dillards and Herb Pedersen. Henley called Wheatstraw Suite a very influential album in his life: “In fact, I drove through a snowstorm to hear them play in Fort Worth back in 1968. They were an interesting band.”

At one point, The Dillards’ impact was such that they caught the eye of Elton John. “The Dillards did an album called Wheatstraw Suite, which is one of my favorite albums,” John said. “It was mostly Beatles songs, and the first thing [I did] when I came to America was go and see them.”

John would ultimately invite the group to open for him on a North American tour. As a result, “The World’s Most Viewed Bluegrass Band” was able to reach a new audience, trailblazing a new era of roots, bluegrass, and Americana music.

Watch a compilation of The Darlings from The Andy Griffith Show. “Old Road brought together, with The Dillards, artists who have changed the course of music history, including Don Henley and Bernie Leadon of The Eagles, and Ricky Skaggs,” says Rodney Dillard, who was one of the people who helped convince Henley to leave Texas in pursuit of his dream of music. Henley and Beverly Cotton Dillard sing with Rodney on “Always Gonna Be You.”

“‘Always Gonna Be You’ was selected for video because of its universal message that true love has the power to overcome life’s challenges — and even time,” says Rodney. “It is an ageless message.” 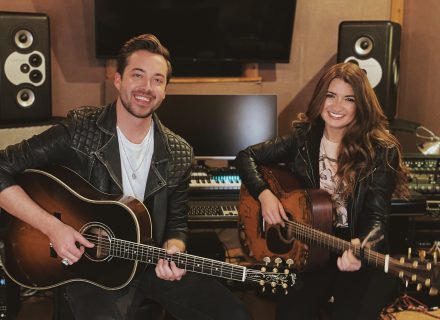 Exclusive Video Premiere: “Saddle Up” by The Okee Dokee Brothers