Dreams of living in a barn laid the foundation for a business built on old-time American values and the nostalgic integrity of the countryside.

For a lot of us in the Western lifestyle, living in a barn would be a dream come true. And the nostalgia of an old-timey barn in a picturesque field along the roadside can make us pull right over and grab our cameras.

Those familiar sentiments are what caught the attention of a married couple in Nebraska in the early 2000s.

Jule Goeller and Len Dickinson had been living in Lincoln, Nebraska, where Dickinson was an entrepreneur and Goeller an accountant. But their son was off at college, and it was time for a change. They decided to move to the country and returned to the area where Goeller had grown up on a farm in northeast Nebraska with the idea of starting a business related to the Western lifestyle. “Farming, the rural way of life, those were always things that were important to me, so we decided we would like to do something that would carry on that heritage,” Goeller says. “There were people that were moving old barns to wherever it was they lived and trying to turn them into homes or a barn. Unfortunately, there is a finite number of [old barns], so we thought we could offer new ones following that proud tradition.”

With that realization, the idea for Sand Creek Post & Beam took shape. Founded by the husband and wife duo in 2004, the company was designed around the practice of creating structure kits and shipping them far and wide, much like early 1900s mail-order homes and barns.

Sand Creek Post & Beam sought to revitalize the market with the old-barn styles that had become endearingly nostalgic but that had mostly disappeared from the American countryside.

“It just seemed to us that barns needed to be out there to create the look of how our countryside, frontier, and prairies used to look,” Goeller says. “We decided to try to emulate that look and also the values that our country was founded with, that the pioneers had when they moved west — that ‘can do,’ that sturdiness, the strength of character.”

The reason turn-of-the-century mail-order buildings did so well in their day was that areas like the recently settled Great Plains lacked abundant wood, and there wasn’t expertise on how to build homes and barns from scratch in newer communities, Dickinson explains. A lot of those same dynamics hold true today. “Lumber is expensive, and also the skill level is lacking,” he says. “I thought we could mechanize this, put it all together, and get our wood at good prices. So we focused on very authentic products that people could afford and that we could customize.” 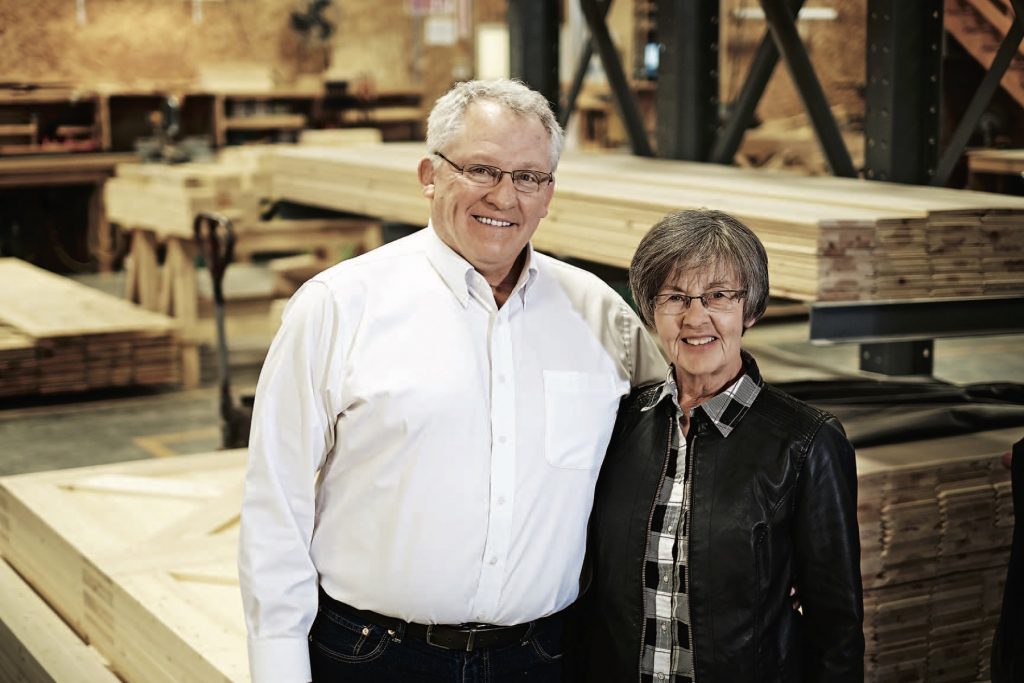 There were already companies doing metal kits, but Dickinson and Goeller wanted to offer something that would accent the landscape more naturally, so they turned back to wood.

Sand Creek Post & Beam’s first product kit was built in the couple’s backyard, and 17 years later, the company is shipping 150 to 200 kits a year to 49 states, including Hawaii, as well as Canada, from their facility in Wayne, Nebraska.

What started out as a vision to provide barns for people, quickly expanded into a whole range of product offerings. “As time went on, our business really became quite customer-driven. We had originally thought our main market would be outbuildings and barns, because there had been the trend where people were moving to the country to get out of the crowded cities. We really hadn’t been thinking about homes at that time,” Goeller says. But early on, people started expressing a desire to live in a barn. “They’d say, ‘We want this to be our home. We always dreamt about living in a barn.’ We were able to really create whatever design people wanted.”

The company has its own designers on staff to help customers create the perfect home, cabin, or barn to meet their needs. And where Sand Creek Post & Beam uses a post-and-beam structure and rustic rough-cut wood, its sister company, Texas Timber Frames, in Boerne, Texas, focuses on true timber framing with mortise and tenon joints.

A lot of business for both companies currently comes from residential projects such as homes or lake houses and cabins, though barns — including those with recreational features such as party barns and loft living spaces — are still prevalent. Where the kit model of yesteryear allowed for next to no choice, Sand Creek Post & Beam and Texas Timber Frames have the flexibility to personalize for possibilities that are as wide-ranging as the customers who have a dream to build.

“Our tagline is ‘building connection,’ and that’s really what we try to do,” says marketing director Cody Wortmann. “Every one of our projects is unique. Even though we have traditional designs as a great starting point, everything is custom and goes through revisions with our customers. We don’t charge extra for that. We get it down to the design that’s exactly what they’re after.” Just as the products themselves are unique, so too are the uses — from homes, barns, and hangout spots to wedding venues and even retail stores going for a rustic look.

“[The structures] just fit so well, in so many different landscapes across America. The product itself is basically the décor. I think the reason it has such a wide appeal is because of that beautiful wood interior look you get that can’t be mimicked,” Wortmann says. He’s quick to point out that wood can take many different turns, and if someone isn’t after a full-on rustic look, the product can shift to match their needs. That might mean focusing only on wood timbers and ceilings and doing drywall for the interior or embracing the new farmhouse trend and going with a whitewashed look.

Whichever style you want, the buildings are meant to be gathering places. “It’s a communal thing,” Wortmann says. “It’s a family-gathering place, almost no matter the use. I think that’s kind of the key.”

These days, the company is expanding even more into the commercial side to provide everything from multistory business structures to university buildings — even a Lexus dealership. Wood is a renewable resource and aids in the improved air quality of a building because of its ability to “breathe” — attributes, among others, that make it a more natural trend in commercial structures, according to Goeller and Dickinson. “Mass timber is getting more and more popular and features some cost benefits and also some ecological benefits that big steel buildings don’t have,” Dickinson says.

And much like an old barn on a country road, the buildings can speak for themselves with the stories they tell of the people who love them. “It’s been so much fun and it means a lot to know that we have connected the present day with the ways that we used to do things,” Goeller says. “It honors the history of our country, honors our ancestors, celebrates the beauty in nature. We’ve been able to bring that to the people of today so they can experience and enjoy the same things as our ancestors, without all the intensive labor and hardships.”