In Montana, at the base of the Beartooth Mountains, living the dream comes down to a basic need — finding wide open spaces, inside and out.

It was going to be a two-year stint in Montana. Move out to the mountains with the family, have an adventure, and then head back home. That was in 2010.

There was too much to do, explains the homeowner of Palisades Ranch, a 15,000-acre working cattle ranch in Southwestern Montana that backs up to Yellowstone National Park. “There’s such a variety — in the winter it’s skiing, snowshoeing, that kind of stuff,” he says. “In the summer, it’s hiking, packing a lunch, riding horses.”

Despite leaving Florida for a region that typically experiences seven months of winter, the dramatic shift in climate didn’t deter this family. Instead, they put down roots — constructing what is now the largest private indoor riding arena in North America and renovating the property’s 8,500-square-foot primary residence. “The driving theme was for it to be very warm, family-friendly,” says the homeowner. “It’s spectacular spaces, but they have to be livable. We have four big dogs and two cats and a bobcat and a bird and three kids and all their friends. The theme was a whole lot about having really special, high-quality spaces, but have them be warm, inviting, friendly, and very high-quality but oriented more toward that style of living. If you look at the spaces, there’s a lot of kid-friendliness to it.”

That doesn’t mean the interiors lack sophistication. In fact, for the homeowner, who worked in construction early in his career and whose father was a contractor, it’s the exquisite attention to architectural detail he appreciates most. 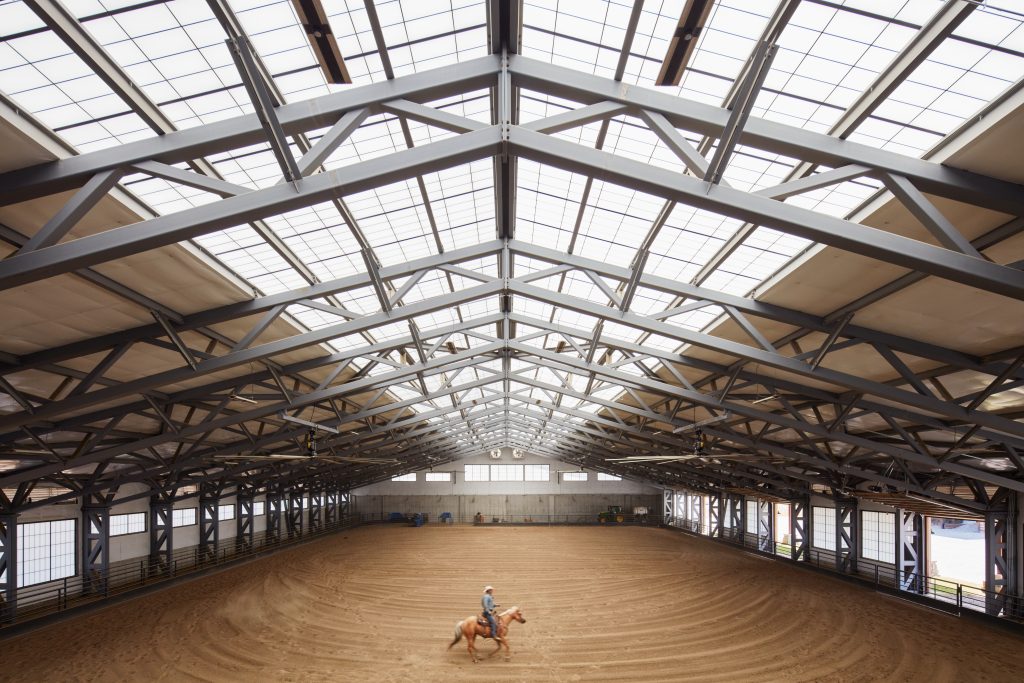 "Riding is part of my family's life, and all of us do different amounts of it," the homeowner says, adding that the riding arena also gets other uses. When there's snow on the ground, it doubles as the practice field for his son's baseball team.

“If you look at the quality of the workmanship and the quality of the materials, it’s over-the-top beautiful — but it’s not gold and marble,” he says. “It’s hand-selected beams, beautiful joinery work, the kind of things that someone with an eye toward that sees. Somebody that walks into your home sees a beautiful warm feeling. They don’t necessarily recognize it’s super-pricey post-and-peg beams that must have taken thousands of hours to install. They’re not seeing that. They’re seeing a nice warm, rustic look.”

The inviting atmosphere was intentional and designed to echo the magnificent natural world around them. It’s at the heart of the American West’s own dreamlike existence. Rolling hills and mountains, vast land that stretches uninterrupted toward the horizon from just outside the door — this welcoming environment inspires more than interior design. It shapes a certain way of life. "The vision was refined rustic," says architect Joe Roodell. "A fresh take on refining the rustic ranch living style with a softer, brighter, more open layout, all while remaining timeless within the surrounding ranch and natural environment."

“It’s very friendly,” the homeowner says. “It’s very basic, and I like being around people that have those basic values. I really like the atmosphere of people caring about each other and being friendly. I like it when I go down the road and you pass a car, they wave. I like having lots of space. I grew up in the big city, in Detroit. This is going to sound somewhat reclusive, but I like not having neighbors, yet I like to be with the people that we’ve met. The wide open space and the freedom to roam my property and the friendliness of the general population. I like that environment. I don’t lock my car when I drive to town. I leave my keys laying there, and my briefcase and whatever I’ve got. I love the simplicity of that.”

Photography: Courtesy of Nikolas Koenig/Otto
From our January 2020 issue.