Every year, C&I produces a comprehensive list of the best things about living out West: the culture, the traditions, the heritage. This year, we focused solely on the people and have rounded up the innovators, influencers, and fascinating figures who make up the many faces of the modern West. Here, a few cultural trailblazers clearing a path for the rest of us to follow.

Nurturing a hankerin’ for horses

At a mere 25 years old, Reata Brannaman (pictured above) has a résumé that rivals the CVs of cowgirls twice her age. As a sophomore at Montana State University, she was the youngest instructor in the school’s history, teaching a class on starting colts in the Department of Animal and Range Sciences. From there, she went on to produce the Brannaman Pro-Am Vaquero Roping. A Yeti brand ambassador, she’s a “passionate horseman and proven badass,” as her online Yeti bio puts it.

It’s little wonder that Brannaman is an overachiever: She’s the daughter of legendary horseman Buck Brannaman, the principle inspiration for Nicholas Sparks’ bestselling book The Horse Whisperer and Robert Redford’s movie of the same name. Her famous father got her started training colts at the age of 12.

“My dad is the best there is,” Brannaman says. “Once I started to learn, I have never stopped. It is such a great place to start working with horses. You’re at the beginning of their education, and every horse presents a new learning experience. Horses are bred to be flight animals, so you should start teaching colts as soon as they’re born by laying your hands on them.”

Despite all she’s learned from him, Brannaman’s hero is not her father, but his foster mother Betsy Shirley, who took Buck in and raised him from a young age, saving him from abuse and nurturing him with love. Shirley died two years ago but remains an example to Reata. “Grandma Betsy was a great horsewoman. With her husband she helped put my dad on the path he chose, and always had something positive to say,” Brannaman says. “We would call her the Mother Teresa of Montana.”

Four years ago, Annita Lucchesi, still healing from a shattered hand from an encounter with her abuser, began to build a database — a comprehensive list of women who had gone missing from their communities or were murdered, noting which were victims of sexual or domestic violence or human trafficking.

“I wanted to find a good working number of missing and murdered Indigenous women in the U.S. and Canada, and everyone — from the Royal Canadian Mounted Police to Amnesty International — had a figure, but they were all different,” says the 27-year-old, who comes from the Cheyenne people. Frustrated with the absence of clear answers, she filed Freedom of Information Act requests with law enforcement, dug into newspaper archives, reached out to families, and used social media. Today, she has logged more than 3,500 cases of missing and murdered Indigenous women in the United States and Canada, and she believes there are 20,000 to 30,000 more, making her database one of the most comprehensive in North America.

I wanted to find a good working number of missing and murdered Indigenous women in the U.S. and Canada, and everyone — from the Royal Canadian Mounted Police to Amnesty International — had a figure, but they were all different.

Lucchesi’s initial goal was to make the information available to tribal communities so they could create effective policy to prevent future violence, but it’s already grown beyond that. Earlier this year, she launched a nonprofit, Sovereign Bodies Institute, an affiliate of Seventh Generation Fund for Indigenous Peoples, which will continue to fill out the database and do research. “We can’t work to make sure women and girls are safe if we don’t fully understand the causes and roots of violence,” Lucchesi says. “The more data we collect, the more we can understand what will be effective in addressing and preventing this for the next generations.”

She made Southwest Art’s “21 Under 31: Young Artists to Watch in 2018,” and we can see why. Despite being a lifelong Floridian, 28-year-old Tara Radosevich’s passions are horses, animals, and the American West, all of which she lovingly captures mainly in acrylics and graphite pencil. No matter the medium, chasing images in the field with her camera and sketchbook has blessed her with memorable experiences of watching wild animals “while my soul bonds to the land itself.” When she’s not sketching or painting in her Florida studio, Radosevich can often be found outdoors otherwise engaged in everything from horseback riding and hiking to attending rodeos and wildlife and bird-watching. “One of my dreams is to visit every or as many national parks as I can. I’ve only been to a few and only got to stay within a day,” she says. “I want to return to Yellowstone and get to see wolves up close, a bull elk, moose, and more wild bison! I’d like to return to the Grand Canyon for a much longer trip and maybe even camp there.”

Her creative influences run from iconic greats like O’Keeffe, Remington, and Russell to contemporary artists including Bonnie Marris, Robert Bateman, John and Suzie Seerey-Lester, and Bev Doolittle. For musical inspiration while she’s working in the studio, favorites include Chris LeDoux, Buddy Red Bow, and Marty Robbins. Her greatest inspiration is her faith: “God blessed me with the gift to create art and the passion for nature and the West. When I create pieces, it’s my way of giving glory and praise.”

Gallery representation in the West seems like it’s just a matter of time and exposure. In the meantime, Radosevich’s custom pet portraits and commissions for animal-, equine-, or Western-themed work are within reach. 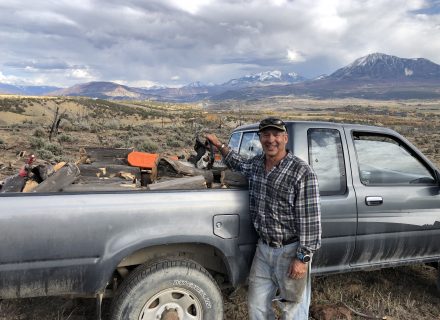