The hardworking chefs and the best restaurants in the West walked away with coveted industry awards last night.

This year’s edition of the James Beard Awards ceremony was held last night in Chicago. It was a night of emotional speeches and celebration all around that brought together the best in the restaurant industry. Make Cimarusti’s recipe for roasted spot prawns is below.

The full list of winners can be found here.

(with roasted tomato, lemon vinaigrette, and salad of herbs)

Select the biggest prawns you can find (up to 4 ounces each). Fill a pot with water. Add salt to reach the approximate salinity of the sea, about 3½ percent by volume. Bring the water to a rolling boil, add the prawns and cook them for 30 seconds. Remove the prawns to an ice bath for 2 minutes. Remove the heads from the prawns and peel the tails. Set the tails aside while you prepare the rest of the ingredients. The heads can be used to make a rich, sweet, and delicious broth.

Preheat oven to 200 degrees. Place halved tomatoes in a saucepan large enough to fit comfortably in one layer. Cover tomatoes with olive oil and season them with salt and the orange zest. Top with the thyme and bay leaf. Roast for 2 hours.

Remove tomatoes from pan, reserve the oil, and chop tomatoes coarsely. Reserve until you are ready to serve.

Combine all ingredients and allow to steep overnight. Remove ginger. This vinaigrette will hold in your refrigerator for 2 weeks.

Mix the herbs in a bowl with the butter lettuce leaves. Season with lemon vinaigrette, salt, and pepper.

Warm a large skillet over high heat. Season the prepared prawns with salt and Espelette. Add enough olive oil to the skillet to film the surface of the pan. Place the seasoned prawns in the pan and
allow the pan to recover heat for a minute. Add butter to the pan and sauté the shrimp for an additional minute, tossing the prawns occasionally to ensure even cooking. Remove the prawns to a paper towel-lined tray. Save the fat in the pan.

Spoon tomatoes onto the center of each diner’s plate and top with 2 prawns. Finish the plate with the salad, and drizzle with reserved cooking fat. Serve immediately. 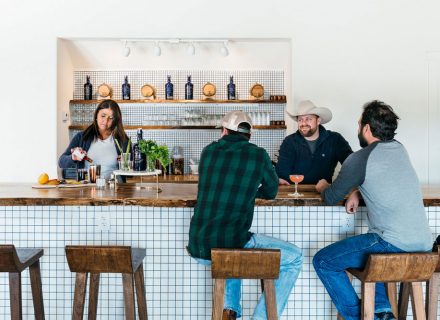 Travel the Dripping With Taste Trail Choose Your Own Culinary Adventure