See the exclusive video premiere of a beautiful new song about love and loss.

Behind the song “One Angel” is a story of people bound together by horses, friendship, love, and loss. Sandy Emory Lawrence wrote the song after the death of her friend Joey Feek from cancer.

On the fifth anniversary of burying his beloved wife, Joey, Rory Feek is releasing a video of “One Angel.” We have an exclusive first look at it here:

Sandy’s husband, Cowboy Jack, used to ride and rope with Joey and was a pallbearer at her funeral and is featured in the “One Angel” video.

We talked with Rory, Sandy, and Cowboy Jack about “One Angel” and the love and friendship they continue to cherish.

Cowboys & Indians: Can you talk about why you chose to unveil “One Angel” on the fifth anniversary of the day you laid Joey to rest?
Rory Feek: For me, the song chose when I should share it, not me. It’s a story written in the wake of Joey’s passing. About the frustration that her friend Sandy felt when all the chemo and radiation and prayers didn’t save her. A few months ago, when we started talking about when we might share certain songs from the album, it was clear that this one needed to be shared on March 8th, on the 5th anniversary of Joey’s funeral. The music video is all about an old cowboy visiting someone he lost, and his way of coming to terms with it. Our little girl, Indy, and I will be standing over Joey’s cross that day too, and in our own way, still trying to come to terms with losing her.

C&I: Sandy Lawrence, who wrote "One Angel," also wrote, “When I'm Gone.” How did you and Joey first meet her and start working with her?
Rory: Sandy worked at a horse vet clinic with Joey when I met her. They were great friends and shared a love for horses and also a love for country music and songs. In time, both of them left the clinic, but Joey and Sandy stayed close friends. Sandy has a gift for sitting down with a guitar or piano and telling the truth in an incredibly honest and authentic way. That’s why her songs resonated with us so much back then and why they still resonate with me now.

C&I: The video features Cowboy Jack, Sandy’s husband and someone who meant a lot to Joey. Can you tell us a little bit about their friendship?
Rory: Joey and I sang at Jack and Sandy’s wedding, and Jack was a pallbearer at Joey’s funeral. Through the years, he is the one that would take Joey riding and taught her how to rope. He and Joey had a connection to horses, the same way that Sandy and Joey had a connection with songs.

C&I: This song comes out after a year when so many have lost people dear to them. Do you have any thoughts or words for them based on your own journey?
Rory: Losing someone is never easy, but losing a loved one who is still young and perfectly healthy is especially difficult. This year, I know a lot of folks have lost friends or family members due to COVID-19 and other complications. And sometimes even when we have a strong faith and know they are in a better place, it’s natural to be angry or feel frustrated. Life, and death, often make no sense. And I think we have to let people feel what they need to feel, to say what they need to say, knowing that in time, they will find their way through it. It’s been five years now for me, but sometimes the pain still feels as fresh as if it was yesterday.

C&I: How did you first befriend Joey and Rory and start working with them in music?
Sandy Emory Lawrence: When I hired on at Tennessee Equine veterinarians around 2001, Joey was working there while waiting for her music career to take off. I knew a little about vet work and a lot about cleaning stalls. She showed me the ropes. We became great friends, worked hard, shared a lot of laughs, and rode good horses in our free time, thanks to Jack.

She would talk about her artist deal at Sony and this songwriter she had a crush on, who turned out to be Rory. It was quite a while before either one of them learned I wrote songs. When Jack and I got married in 2004, I asked them to help me perform a song I wrote, “If Not for You.” They later ended up recording it.

C&I: I understand that you wrote the beautiful and heartbreaking song “When I’m Gone” — which Joey+Rory recorded a couple of years before Joey passed away from cancer — as a kind of therapy as your late mother battled cancer. How does “One Angel” fit into that?
Sandy: My mother grew up on the Rio Grande border in West Texas. She was my cowgirl hero, and when she was dying of cancer it was my job to help see her through it. The song “When I’m Gone” was written to comfort not only myself at her loss, but for my son, my husband, anyone who would need comfort at my departing. As I recall, Jack told Rory about the song, and he asked us to send him a copy. I remember Joey loved it but was worried she didn’t have the range to sing it. Rory and I both stated simply: “You do.” How could any of us have known what that song would come to mean?

As Joey+Rory’s career blossomed, I saw less of Joey, but we stayed in touch and I considered her one of my closest friends. It’s too painful, even now, to revisit that journey — the discovery of her cancer to her loss. I couldn’t be by her bedside as I could for my mother. I chewed on that pain for a long time before I had to let it out in “One Angel.”

C&I: Can you talk about Rory recording “One Angel?” What does it mean to you as a songwriter to offer this piece of yourself to his voice and his story?
Sandy: As Rory knows, I really didn’t intend for him to even hear the song, much less record it. He knew me well enough to know I had written something and asked to see it. I warned him it might offend him because we have different relationships with God. The details in the song are all my personal truth about my friend — listening to her pray, sharing letters, her pink top boots I wear every time I go riding. But I tried to write it in a way that any old cowboy could recognize themselves in a similar situation. It’s the emotional truth that matters in any song. But for me, and for Rory, it will always be about the angel we knew as Joey Martin while she was on this earth. The liveliness, her spirit, the starshine she radiated went far beyond her physical beauty. I miss her sorely.

C&I: We understand that you used to ride with Joey. How did you two first start riding and hanging out?
“Cowboy Jack” Lawrence: I met Joey through Tennessee Equine’s Dr. Monty McInturff. She assisted him on vet trips here to Red Ranch working on using horses, training horses, and clients’ problem horses. I got to know her at public benefits, such as modeling shows for the Cowboy Store; pitched her dog, Rufus, for a movie, “Our Very Own”; helped to line her up to model for great Wrangler advertisements through Red Ranch. We shared a passion for Western living. Rory was introduced to me by a music manager, Philip Kovac.

Joey had a great desire to rope. I had the horses and rope cattle. She had talent and natural ability to ride with great confidence, and she could outrope most men. She was thrilled to be in her element chasing a steer down the arena. The only other comparison would be her stage presence and ability to sing like no other. That’s when she would smile. Rory and Joey knew how to work the stage.

C&I: What is your favorite memory of spending time with Joey?
Cowboy Jack: My favorite memory of spending time with Joey was sharing miles in the saddle with her in the arena or trail riding in Percy Warner Park. She possessed a special energy, a glow when she was astride a horse. Equitation came so natural to Joey. She belonged in a saddle with a job.

C&I: Talk a little about your friendship with Joey and Rory and what it meant to be a part of the “One Angel” video.
Cowboy Jack: [It meant a lot] just to know Western-bred people with dreams and goals they shared together and always reached out to Red Ranch no matter how famous they became. Friends, confidants, role models — [their] reaching for pure everyday ranch living with the highest regard for true friendship with just a plain old cowboy will never be forgotten. Making that video was a huge compliment except for standing on her grave. I have the utmost respect for Joey and Rory.

Sandy Emory Lawrence is working on a new album that will release later in 2021. Listen to her music on digital streaming platforms.

“One Angel” will be featured on Gentle Man, Rory’s first solo album and the first he’s recorded without Joey. Set for release via Gaither Music on June 18, a week before Father’s Day, Gentle Man will feature appearances by some of Rory’s good friends and fellow musicians, including Vince Gill.

Read Rory’s blog post about the song and music video “One Angel,” here. 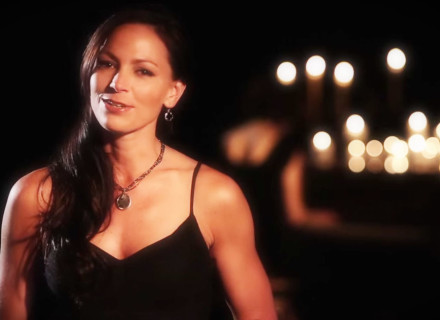