An anniversary “sa-loot” to the music, the jokes, and the Honeys of Kornfield Kounty.

“The most irrelevant, stupid, and ghastly program in recent history.” That was the Los Angeles Times assessment of Hee Haw after its first episode aired on June 15, 1969. Other reviews were not as encouraging.

And yet, from such humble beginnings emerged a series that survived long enough to sink into the DNA of multiple generations. Maybe you don’t recall that Hee Haw was a weekly institution for three decades, or that the reruns have played on RFD-TV since 2008. But if you’re flipping channels and spot Archie Campbell standing in front of a picket fence singing “Where oh where are you tonight?” the rest of the song will come right back, with happy memories of corny jokes and beautiful girls and wonderful, wonderful music.

“It was like my second family,” says cast member Misty Rowe. “Kornfield Kounty was this wonderful little fantasy world. I was very blessed to be in it for 19 years.”

The show’s origins were as improbable as its success: Television’s most Southern-fried series was created by two Canadians in Beverly Hills. In 1968, writer-producers John Aylesworth and Frank Peppiatt were collaborating on a CBS variety series starring comedian Jonathan Winters. The show wasn’t working, but the network noticed that ratings went up when country singers like Jimmy Dean and Buck Owens were booked as guest stars. That, along with the successful 1969 debut of Johnny Cash’s namesake variety show, inspired the idea for a country-themed variety series. Aylesworth and Peppiatt came up with the title and began assembling what became known as “the whole Hee Haw gang.” The first hire was fellow Canuck Gordie Tapp, who brought in veteran Tennessee singer-comedian Archie Campbell.

Campbell recruited Grandpa Jones, Minnie Pearl, and David “Stringbean” Akeman and suggested the series be shot in Nashville. As Kornfield Kounty’s resident doctor, barber, and justice of the peace, he became Hee Haw’s most valuable player, even if all of his material wasn’t exactly original. “Remember boys,” he’d tell the producers, “an old joke is brand-new if you’ve never heard it before.”

“Old Archie was an absolute godsend as a writer and as a performer,” recalled John Aylesworth in his book The Corn Was Green. “We couldn’t have done the show without him.” The Houston Chronicle critic called it “Possibly the worst show I’ve ever seen.” “Anyone who would watch ‘Hee Haw’ doesn’t deserve to own a television set,” raved the Toronto Star. But by the fifth episode it was a hit, and CBS picked it up for another season. “There were so many negative articles about the show, people began tuning in to see how bad we were,” said producer Sam Lovullo.

Despite finishing its second season at No. 16 in the ratings, the show was a victim of the network’s “rural purge.” Programming head Fred Silverman thought the “Tiffany Network” had too many rednecks, so he canceled Hee Haw, The Beverly Hillbillies, Green Acres, and Mayberry R.F.D.

Hee Haw was the only casualty of the purge to survive by moving into syndication, where it also picked up some new and much-beloved cast members in Gailard Sartain, Marianne Gordon (who met future husband Kenny Rogers on the show), and Misty Rowe.

“It was my father’s favorite show, and my mother hated it. She would say, ‘Oh, he’s watching that godawful show again,’ but once I was on she loved it,” Rowe remembers. “If I had won an Oscar, it would not have meant as much to my dad as being a Hee Haw Honey.”

Rowe was a regular in the All-Girl Jug Band and Gossip Girls skit around the washtub and was paired with one of the show’s most unlikely breakout stars. Alvin “Junior” Samples was a Georgia native with a third-grade education who wore bib overalls to his audition. When he found out what he’d be paid, he said, “That’s a heck of a lot more than I’d make moonshinin’.”

Whether he was selling Edsels at Samples Sales (“Call BR-549”) as one of the Culhanes of Kornfield Kounty or reducing Roy Clark to hysterics in the cornfield by trying to pronounce trigonometry, Junior was an authentic original.

He wasn’t the only one. Who else on TV was like Minnie Pearl? Or Louis Jones, the banjo player who became “Grandpa” when he was still in his 20s and always had a tasty answer to the question “What’s for supper?” Fans also fondly recall Don Harron as KORN newsman Charlie Farqueson, the homespun humor of John Henry Faulk and Reverend Grady Nutt, Lisa Todd as Sunshine Cornsilk, and Cathy Baker, a perky blonde discovered in the studio’s paint shop who became one of the show’s longest-serving regular cast members.

Everyone had moments to shine in the quick-cut one-liners and recurring skits, a format inspired by Rowan & Martin’s Laugh-In. “Hee Haw was the first computer-edited show in the history of television,” Rowe recalls. “We would shoot for a month in June and then two weeks in October, and that would be enough for a season of shows. One day we’d do the cornfields, then Roy Clark’s solos on another day, and then Junior’s car lot all morning and Minnie Pearl’s schoolhouse in the afternoon. All the clips would be rated 1 to 5 by people in the booth, with 5 being the best, and the computer would slot all the pieces into place.”

Unlike on Laugh-In, however, there would be no references to Vietnam or Richard Nixon in Kornfield Kounty. Although possibly offensive to any feminist who might tune in:

“It protects the property but doesn’t spoil the view.”

“It was a family show, for people who just wanted to kick back and forget about everything,” remembers Irlene Mandrell, who joined the cast after three years on the variety series Barbara Mandrell and the Mandrell Sisters. “When I was playing drums with Barbara, I was 12 or 13 when Hee Haw came on, and I remember thinking, I want to do that show! It seems like so much fun! I wasn’t old enough to be a Hee Haw Honey at the time, but I dreamed of it.’” 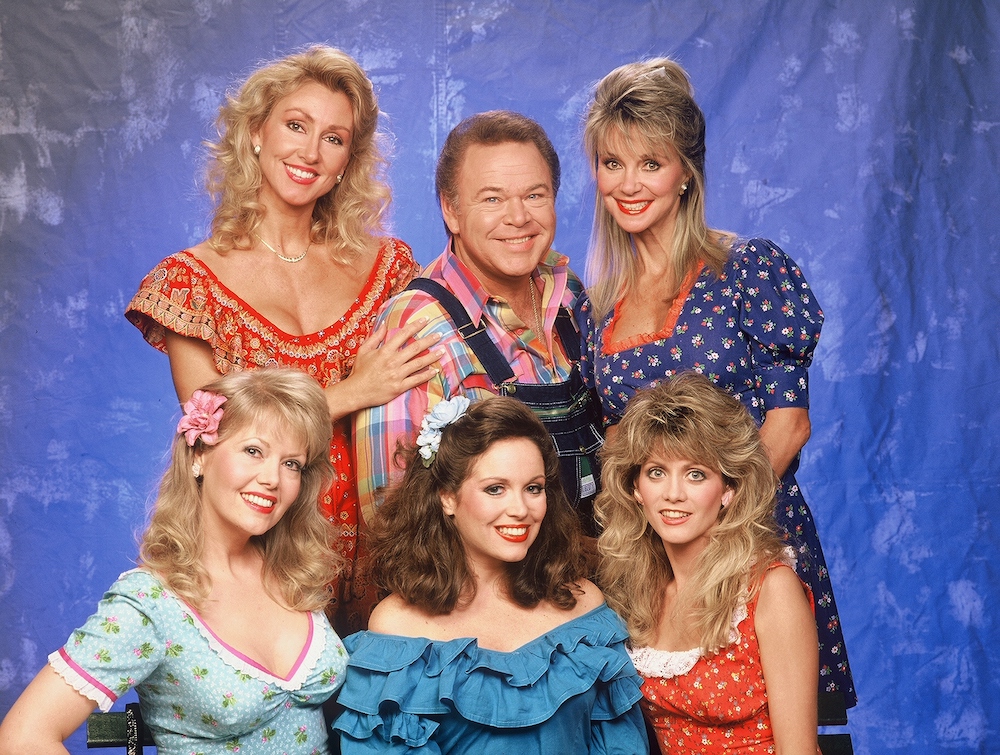 “I was surprised it didn’t last. But in most markets it aired right before Hee Haw, and maybe that was just too much,” Rowe says. Since the series mixed rustic jokes with performances from guest stars like Loretta Lynn, Conway Twitty, and the Oak Ridge Boys, some viewers couldn’t tell when Hee Haw Honeys stopped and Hee Haw began. “Some people started turning Hee Haw off halfway through, and the producers didn’t like that,” Rowe recalls. “We figured one of them had to go, and that was Hee Haw Honeys, though we got very good ratings.”

Mandrell quickly found her niche as Kornfield Kounty’s telephone operator. “When I first went into the cornfield, I asked for a script, and they said they don’t let anyone see the jokes. So when we read them on cue cards, we’re seeing them for the first time. That’s how they got the reactions they did. If you messed up, that was part of the fun, and you got more airtime.”

Look around the ensemble during the “pickin’ and grinnin’ ” performances and you’ll spot as many as five Country Music Hall of Fame members onscreen at a time. And if you visit the Hall of Fame, you’ll spot one more Hee Haw tribute: The main cornfield (there was a second, smaller one that was easier to set up) that appeared in the majority of the 585 episodes is now on permanent display.

“Visitors always smile when they see it,” says Hee Haw historian Danny Breen Forbes. “I still remember going to see it with Sam Lovullo and [cast members] Jim and Jon Hager. They were just thrilled.”

Forbes, who helped arrange a 2011 Hee Haw reunion on RFD-TV, isn’t surprised that the series continues to find an audience. “I grew up working in a feed store, so it was something I could relate to. But for those in Los Angeles and Boston, it was a glimpse into a whole other way of life, where no one takes themselves too seriously and the best jokes are the ones on you,” he says. “Hee Haw always owned what it was and was never apologetic about it. It’s still making people happy, and from the beginning, that’s all it was supposed to do.” The End of a Longmire Journey