Elevating the utilitarian tools of the Western lifestyle to fine art, the craftsmen of the Traditional Cowboy Arts Association will exhibit their best at the National Cowboy & Western Heritage Museum, opening October 6.

This year’s Cowboy Crossings at the National Cowboy & Western Heritage Museum in Oklahoma City is a made-in-cowboy-heaven marriage of the Traditional Cowboy Arts Association and Cowboy Artists of America. This show is particularly special for the TCAA: It marks the organization’s 20th anniversary. The must-see art event kicks off with an opening weekend full of art-related activity October 4 – 6. Galleries open to the public Saturday, October 6, and the artwork stays on view for a good while thereafter. The TCAA exhibition, on view through January 6, 2019, showcases the best of saddlemaking, bit and spur making, silversmithing, and rawhide braiding. Get to know the craftsmen behind the work below.

Wilson Capron grew up in far West Texas with a family background in ranching. He graduated from Texas A&M University - Commerce in 1996 with a degree in agricultural economics with a minor in business. The same year he began to apprentice under bit and spur maker Greg Darnall. He then opened Capron Bits and Spurs in 1999. Capron’s unique designs also stem from the influence of his father, artist and cowboy Mike Capron. Wilson lives in Christoval, Texas, with his wife, Katy, and daughters, Macy and Emmy. 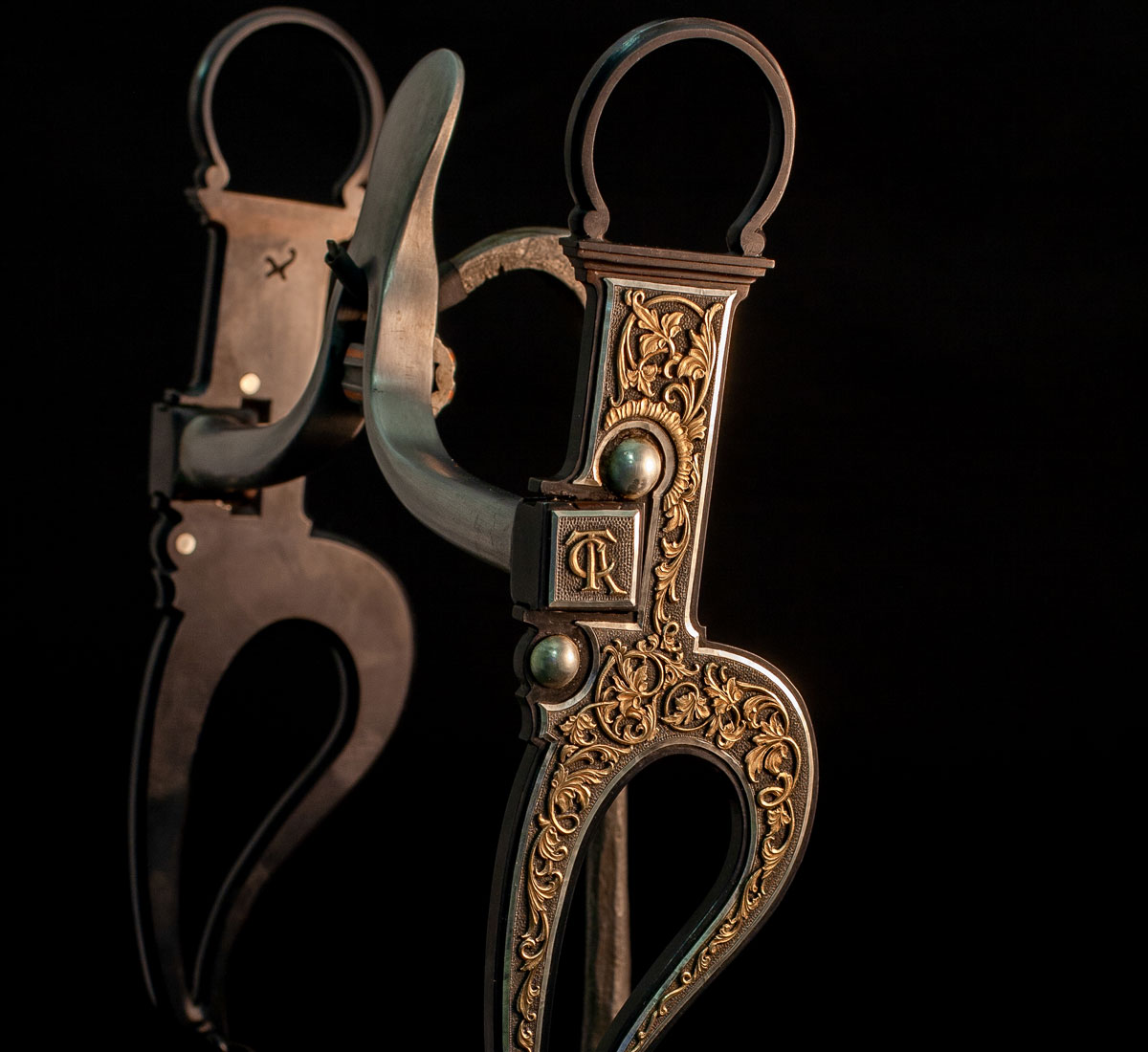 “California style bit shanks have always been some of my favorites. One of the reasons is the large canvas some provide allows me to have some fun with decorations. The Santa Paula [detail, above] is no exception. Through the years filigree work has been a way for me to add some dimension, but I have never committed to using gold for it. TCAA’s 20th anniversary seems like the perfect spot. I have 14kt gold sculpted scrolls overlaid on sterling silver that is then overlaid on the steel. The mouthpiece is hand-forged with the San Joaquin style in mind. This was a blast to do and worth every moment. Beau Compton was born and raised in a rodeo and ranching family. Though he was initially interested in bit and spur making, he started silverwork in 1997 after his father-in-law introduced him to Vic Vasquez, a saddlemaker, silversmith, and bit and spur maker. In 2006 Compton started to pursue silverwork as a full-time business, and in 2015 he was awarded the TCAA Fellowship, which — along with the TCAA Emerging Artists Competition — he credits for propelling his work to the level of TCAA membership. Beau currently resides with his wife and two children on his in-laws’ family-owned cow/calf operation. “It is a blessing to raise my children, who are the sixth generation on the ranch, in this environment,” Compton says, “and to perpetuate Western lifestyle and values.” Mark Dahl (Emeritus Member) grew up as a cowboy in the cattle ranching community of Starr Valley near Deeth, Nevada. As a young man he made several pairs of spurs but received no formal training — he relied instead on a working knowledge of cowboy gear. Dahl was always fascinated with silver-mounted bits and spurs. In 1982 he decided to try his hand at silversmithing. Though beautiful works of art, everything Dahl builds is also functional. He strives to please the senses with his creations. For nearly half a century, master bit maker Greg Darnall (Emeritus Member) has shaped the equine world’s view of bits and spurs and how they are best used in the quest for better horsemanship. Darnall has been involved with equine organizations such as Federation Equestrian International and the National Reining Horse Association. He served on the NRHA Board, was a member of its judges committee, and also served as the group’s president. He has judged competitions all over the world for both associations. These days, Darnall still wears many hats. His custom bit business remains very popular, and he has released a commercial bit line along with an educational DVD. He also conducts clinics and lectures around the world. He remains passionate about riding, educating, and creating beautiful bits. Mark Drain (Emeritus Member) is a TCAA founding member. A professional silversmith for more than 45 years, Drain is semi-retired and lives with his wife, Kathy, in Washington. He produces a few specially commissioned pieces of work each year along with an original piece for the annual TCAA show when possible. A fifth-generation stockman, Scott Hardy became a full-time Western silversmith in 1981 and, 17 years later, became a TCAA founding member. Hardy finds inspiration in nature, art, fine craftsmanship, and the West itself. Using each of these to fuel his passion, Hardy celebrates the West through his artwork, hopefully inspiring craftspeople, artists, and collectors alike to see the importance and relevance of the North American cowboy culture. “Embellishing horse and rider with precious metal is a tradition as old as man on horseback,” Hardy said, “and deserves the respect of being done by hand one piece at a time.” Photography: Detail of a necklace braided with fine rawhide in a Trenza Patria (rectangular braid) style featuring a miniature set of classic hobbles as a pendant, 2018 TCAA exhibition/Carla C. Cain

Leland Hensley picked up rawhide braiding while attending Sul Ross State University in Alpine, Texas, in the early 1980s. After graduating he managed a small Texas ranch and continued to hone his skills at braiding rawhide. Thirty-six years of braiding rawhide, 16 years as curator for the Trappings of Texas, and several trips to Argentina to learn and compare techniques have inspired Hensley’s unique braiding style. His passion for art, Western culture, and the horse have driven him to make each braided piece show a higher skill level, and be recognized from across the room as uniquely his own. Mehl Lawson (Emeritus Member), an heir to the vaquero tradition of old California, is an accomplished horse trainer, sculptor, and braider. From his home and studio in Bonita, California, near San Diego, he combines the world of horses with that of fine art and rawhide-braiding artistry. His sculptures are shown annually in the National Cowboy & Western Heritage Museum’s Prix de West Invitational Art Exhibition & Sale, and he became a TCAA member in 2007. Lawson received recognition as the 2008 Rawhide Braider of the Year by the Academy of Western Artists. His work is also include in the Cowboy Artist of American segment of Cowboy Crossings. Born in Buenos Aires, Argentina, Pablo Lozano’s family tradition is tied to Argentina’s cattle heritage. At age 15 he began studying rawhide braiding with his mentor, the late Don Luis Alberto Flores. A career rawhide braider, Lozano believes in the concept of apprenticeship as a means to educate and preserve the art of traditional rawhide braiding. He has been awarded Best of Show several times at the Sociedad Rural Argentina and is a member of their panel of judges. Lozano frequently participates in braiding seminars and workshops in the United States, and was awarded the 2015 Braider of the Year by the Academy of Western Artists. Ernie Marsh has been a professional bit and spur maker for 25 years. His hardworking background includes ranching, rodeoing, and timber felling. He pursued his passion of building his bridle bits and spurs with the same serious attitude and desire to learn the skills required. He considers himself fortunate to have had opportunities to gain insight from horsemen and engravers — noted masters of the trade. With his wife, Teresa, Marsh currently resides near Lovell, Wyoming. As a TCAA founding member and a 2016 United States Artists Katie Weitz Fellowship recipient in Traditional Arts, Marsh has influenced the work of many contemporary bit and spur makers.

“This is one of my favorite historical spur designs first made popular by father and son José and Jesús Tapia, bit and spur makers in the Los Angeles area 1850s – 1920s,” Marsh says about the shown work. “Something special for our 20th annual TCAA exhibit.” Jean-Pierre “Pedro” Pedrini was born in France in 1952. He found an interest in Western riding and leather craft as a youth, which inspired several trips to the United States to learn saddlemaking skills; in 1984, he came to stay. He established the Pedrini Saddle Company in 1990, and became a United States citizen in 1992 and a TCAA member in 2007. Named 2008 Saddlemaker of the Year by the Academy of Western Artists, Pedrini and his son, Tony, reside in Pendleton, Oregon, where he oversees Hamley’s saddle shop and runs the Hamley Saddle Academy. Cary Schwarz was involved in the TCAA before the organization even had a name. Reflecting on the past 20 years, two words come to his mind: hard won. Each year has presented new challenges for the organization. The constant requirement to improve one’s work year to year has also proved challenging. Though the journey has not been easy, Schwarz remains thankful for each step along the road, for such is the way of an artist/craftsman. As a veteran of the battle for fine craftsmanship, he looks forward to the work of balancing the TCAA’s needs with a mature and successful career. Nate Wald lives and ranches on the Crow Indian Reservation near Lodge Grass, Montana. “We have a good set of Red Angus cows and raise some real nice horses,” Wald said, referencing his wife T.J. Braiding rawhide is an everyday part of this lifestyle as well, he noted. A longtime TCAA member, Wald was TCAA president from 2015 – 2016. Troy West wanted to become a professional rodeo cowboy, but, in 1977, when his brother decided to attend school to learn saddle-building, West went, too. Along with making beautiful saddles, his lifelong goal includes creating a saddletree that is comfortable to the horse and the rider. He has won Best of Show at the Boot and Saddlemaker Roundup five times, and, in 2014, he received the Will Rogers Award for Saddlemaker of the Year. West said becoming a TCAA member is one of the major highlights of his career — he considers it an honor and a privilege to work with some of the best craftsmen in the world.

“This is a full-size buffalo skull completely covered in leather," West says. “I left the bone of the nose exposed so I could carve it to match the mixed floral carving of the leather. A fun piece to make for Cowboy Crossings 2018.” Building quality saddles has been John Willemsma’s goal for 40 years. From the tests of the working cowboy to the eye of the finest collectors, he is driven by excellence. Since becoming a TCAA member, it has been gratifying for him to place his feet in both the worlds of working gear and functional art. Willemsma and his wife, Debbie, are enjoying life in Westcliffe, Colorado, nestled in the Rocky Mountains. He is now passing his knowledge of saddlemaking to his son, Logan, and strives to honor all those who have guided him and shared their knowledge of the craft he holds dear.

Read more about Cowboy Crossings and our interviews with Wilson Capron and Martin Grelle about the show.